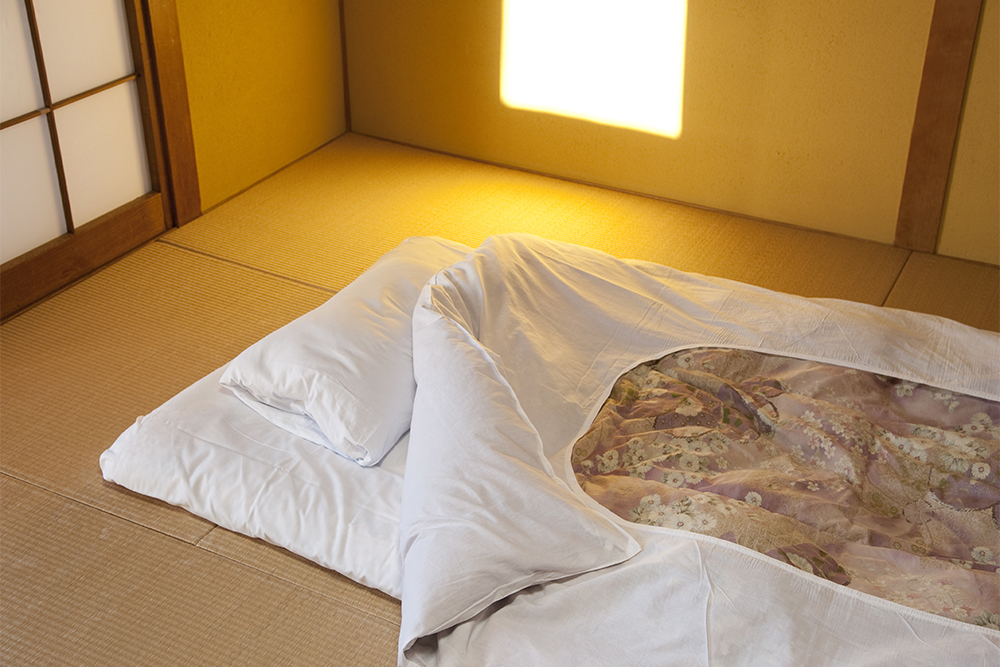 Do you say that is unique to floor life… Well, if there was no bed, we would have to put the futon on the floor. Today, beds are also very popular in Japanese homes. Most of the accommodations, such as recent hotels, now have beds. That said, there are still more ways to lay futons on the floor. There are many people who prefer that. It is not only for Japanese people, but also for overseas people. Even if you are used to bed and resist it, such as by saying “It’s a much to sleep on the floor”…, “Actually, it’s not so bad! (´▽｀)ﾉ” is often the more unexpected response after trying.

If you can choose a bed or futon at your accommodation, try it once. Of course, the quality of the futon definitely greatly differs, but I think it’s quite comfortable. You never need to worry about falling out of bed, that’s for one thing!

Here’s a little trivia about “futon”. It is said that the style of sleeping with “Shiki-futon (mattress)” on the floor and “Kake-futon (quilt)” on top of it has been common in Japan since modern times. Sleeping on the floor has been a common style of sleeping since ancient times. But it wasn’t until the Meiji era (1868-1912) that the sleeping style of “Shiki-futon×Kake-futon” became popular. Before the Warring States period, people used to lie down on “tatami mats” or “mushiro mats (kinds of grass seat)” and hang their kimono. If it’s cold, they put on a few layers. Regardless of their status, people in those days slept in this sleeping style. After the Warring States period, when cotton cultivation spread throughout Japan, cotton-filled kimono came to be used as winter wear. It looked exactly like a kimono-shaped futon. This is a kind of nightgown called “Kaimaki”. “Dotera” is a similar type of nightgown. After the Edo period (1603-1868), “Shiki-futon” finally became widespread among the high class and wealthy people. It was around the end of the Edo period that the rectangular “Kake-futon” we know today came into use. These facts have been neatly depicted in Japanese picture scrolls or “Ukiyo-e” prints. As a matter of fact, most Japanese people do not know these. If you have a chance, please tell your Japanese acquaintances about that.