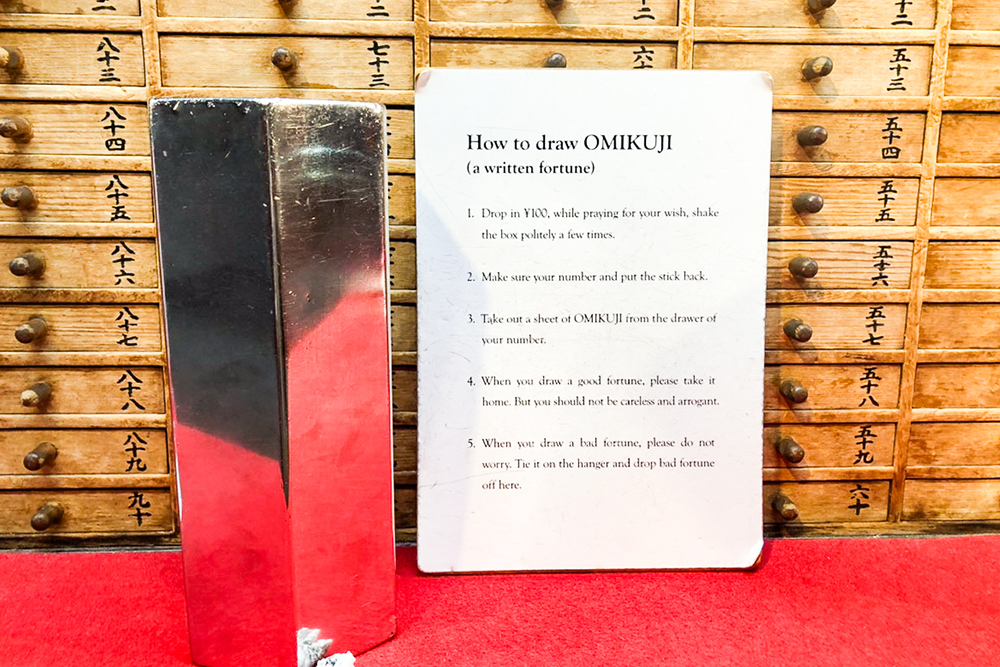 In Japan, it is called “Omikuji”. It is generally considered to be a fortune telling tool to predict one’s fortune, good or bad, for the coming year, or one’s current fortune. In a way, it’s just another big event!(￣▽￣;)! …Sorry. That’s a bit of an exaggeration. Well, in our daily lives today, it is something or game that we do just to try our luck, but originally it was a very sacred ritual, or one of the ritual events. As mentioned in the list of annual events held at Jinjya shrines, Shinto rituals nowadays are mainly of the nature of praying for “national security,” “peace under the heavens,” and “good health,” accompanied by purification, and showing gratitude for the fulfillment of such prayers. In the past, in addition to the above, Shinto rituals were also held for the purpose of asking for the “will of gods”. When making decisions on important matters concerning the government of the country, they asked gods for the “good fortune” of the decision. It is a kind of shamanistic belief that can be found in many parts of the world. There were also rituals called “Kami-Gakari(or Kami-Tsuki)”, in which the god’s will was conveyed directly from the mouth of the person possessed by the god. One of the ways to ask for the will of the gods was to draw lots called “Omikuji”. This is said to be the origin of today’s “Omikuji”. There are many theories about this, and due to the nature of Japan’s history, the influence of Buddhist culture is also included. 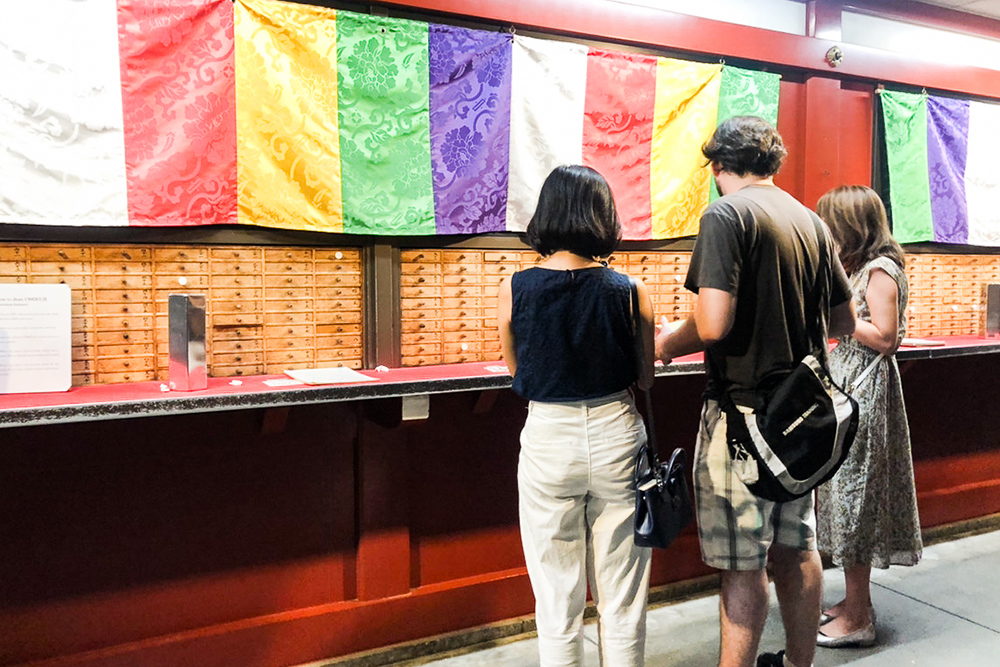 There are different ways to divide up the good and bad luck depending on the shrine, but basically it is within the following twelve steps. The left is “better” and the right is “worse”. 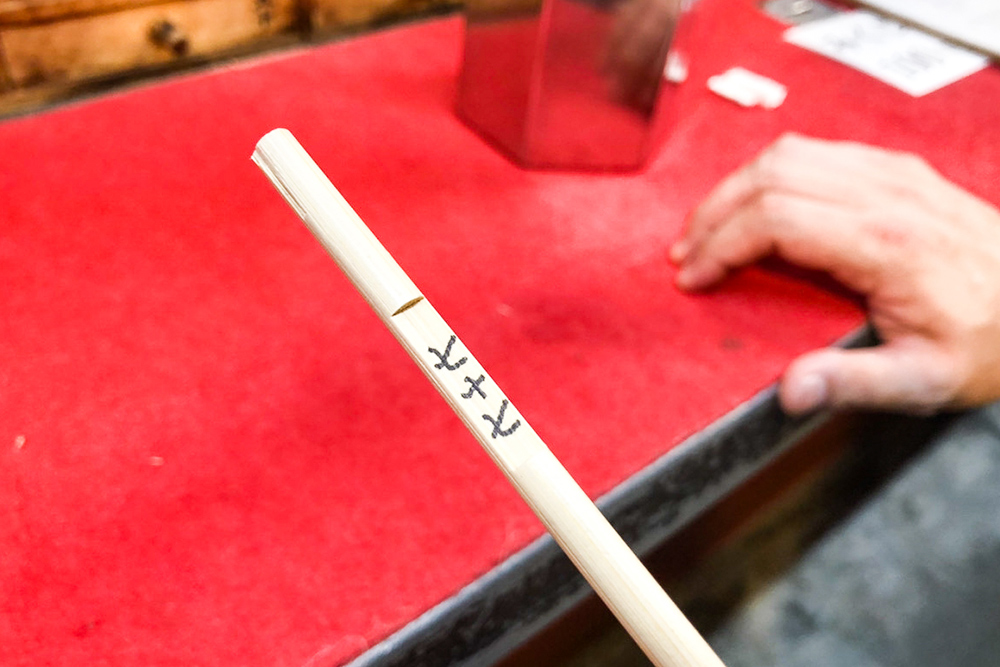 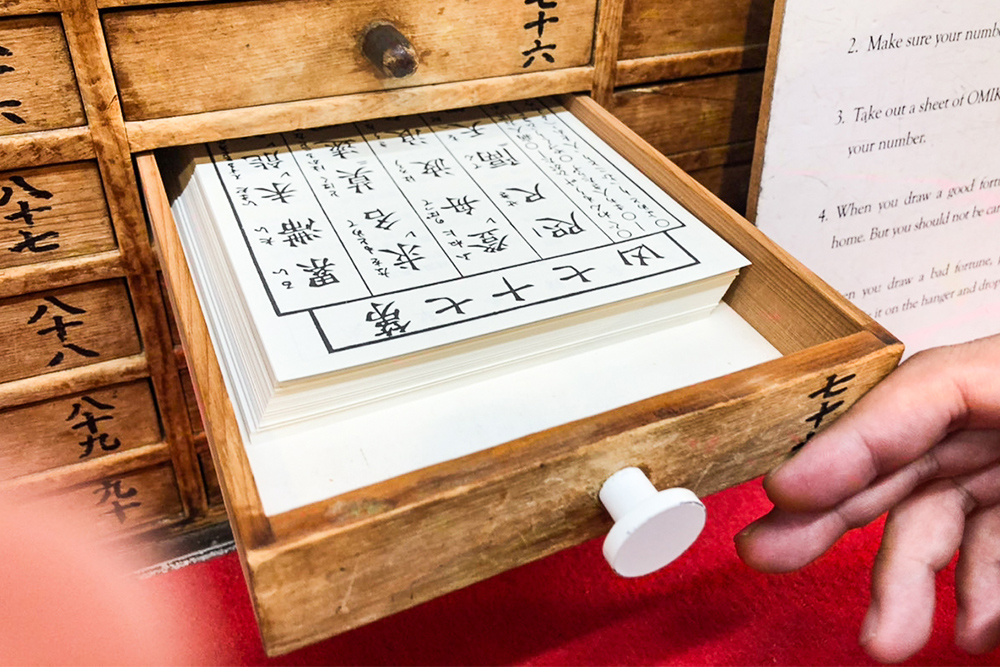 In actuality, the contents of this “Omikuji” are more important than these good and bad fortunes. However, many of them are written in a unique way, making them a bit difficult to understand. There are some phrases and words that are not used in everyday life. We’d like to give you a brief explanation of some of the most common keywords.

・”待ち人 (Machi-bito)”:
A person or thing that leads you in the right direction in life.

・”探し物 (Sagashi-mono)”:
A person, thing, or thing you are looking for.

・”旅立ち (Tabidachi)”:
A journey, an outing, a beginning of some kind.

・”学問 (Gakumon)”:
Academic study and learning. Some kind of training is also included. 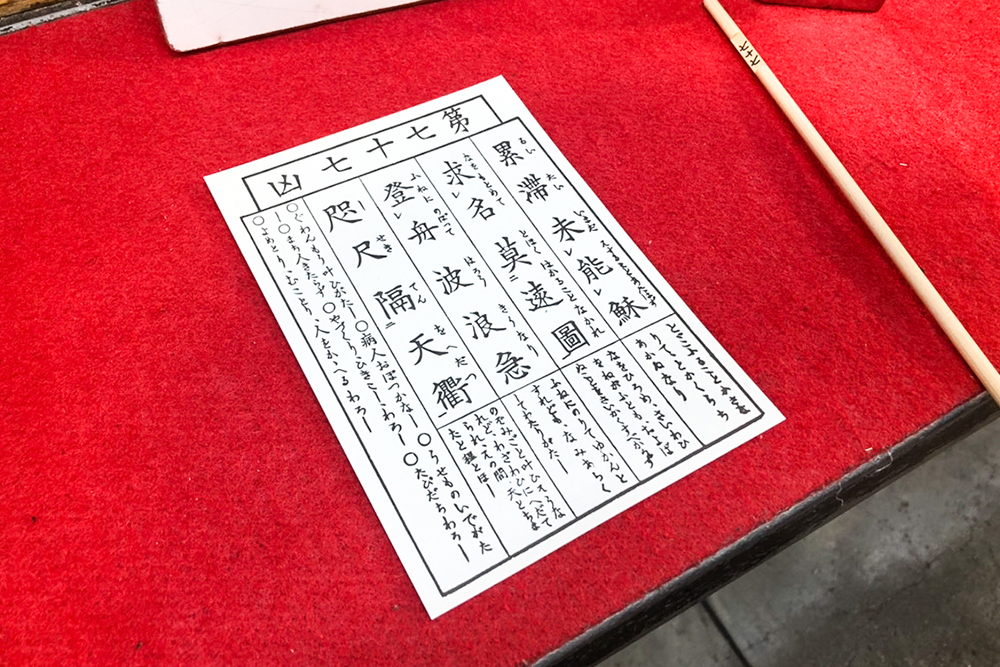 In addition to the matters mentioned above, there are also “Waka” poems described in the slips. We’d like to draw your attention to this “Waka” poems as well, because it offers some advice in a comprehensive sense… Well, when it comes to the interpretation of “Waka” poems, most of us Japanese are often left wondering…「(￣▽￣;)… However, if you have tried to read the fortune but don’t know what it says, ask someone about it. It’s a good opportunity, right? It might be a good encounter to have. Regardless of whether the fortune is good or bad, you can either take it home with you or tie it at the “Musubi-Dokoro(Knotting Spot)” in the shrine grounds. In any case, they are sacred and should not be treated roughly. The act of tying slips at a “Knotting spot” also has the meaning of tying “fate” with the gods enshrined at the shrine. This act implies gratitude for the chance encounter and the opportunity to hear “God’s will”. If you were told that, you’d probably feel compelled to tie the knot, right? We hope that you will be able to get good fortune slips… or rather, interesting ones.