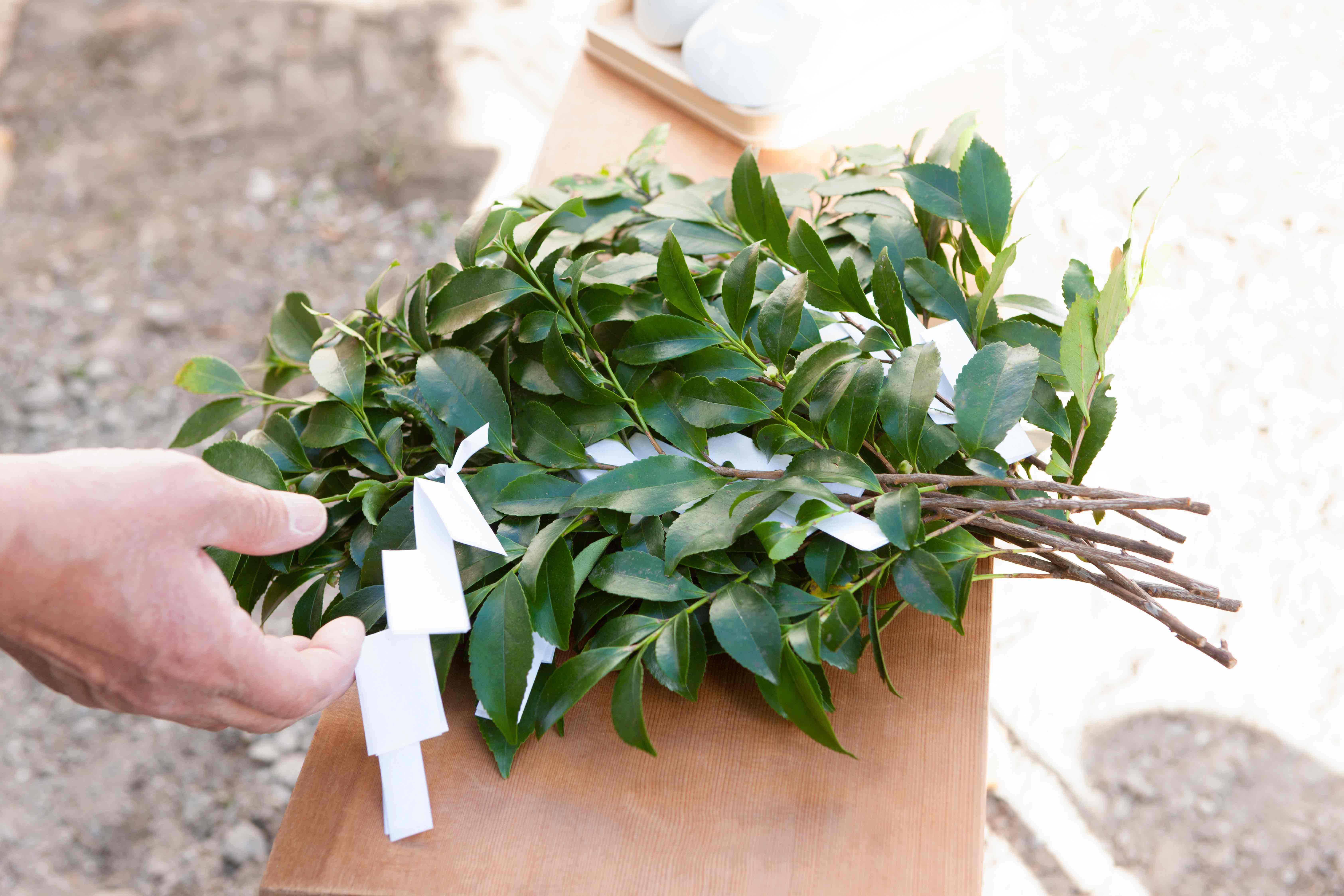 At shrines or somewhere, have you ever seen the ritual events of a Shinto priest waving a stick with some kind of wispy paper bundle? The ritual events may be held at a shrine, in a company building, or at a construction site, depending on the purpose. You may have seen the events being held in various seasons and places. That kind of ritual is called “Harae” which is one of the Shinto rituals. The stick with the bundle of paper that the Shinto priest holds in his hand is a sacred tool called an “Oonusa” or “Gohei”. Some of you may have been wondering, “What are those rituals all about…?” OK. In this article, we would like to explain about “Harae”. 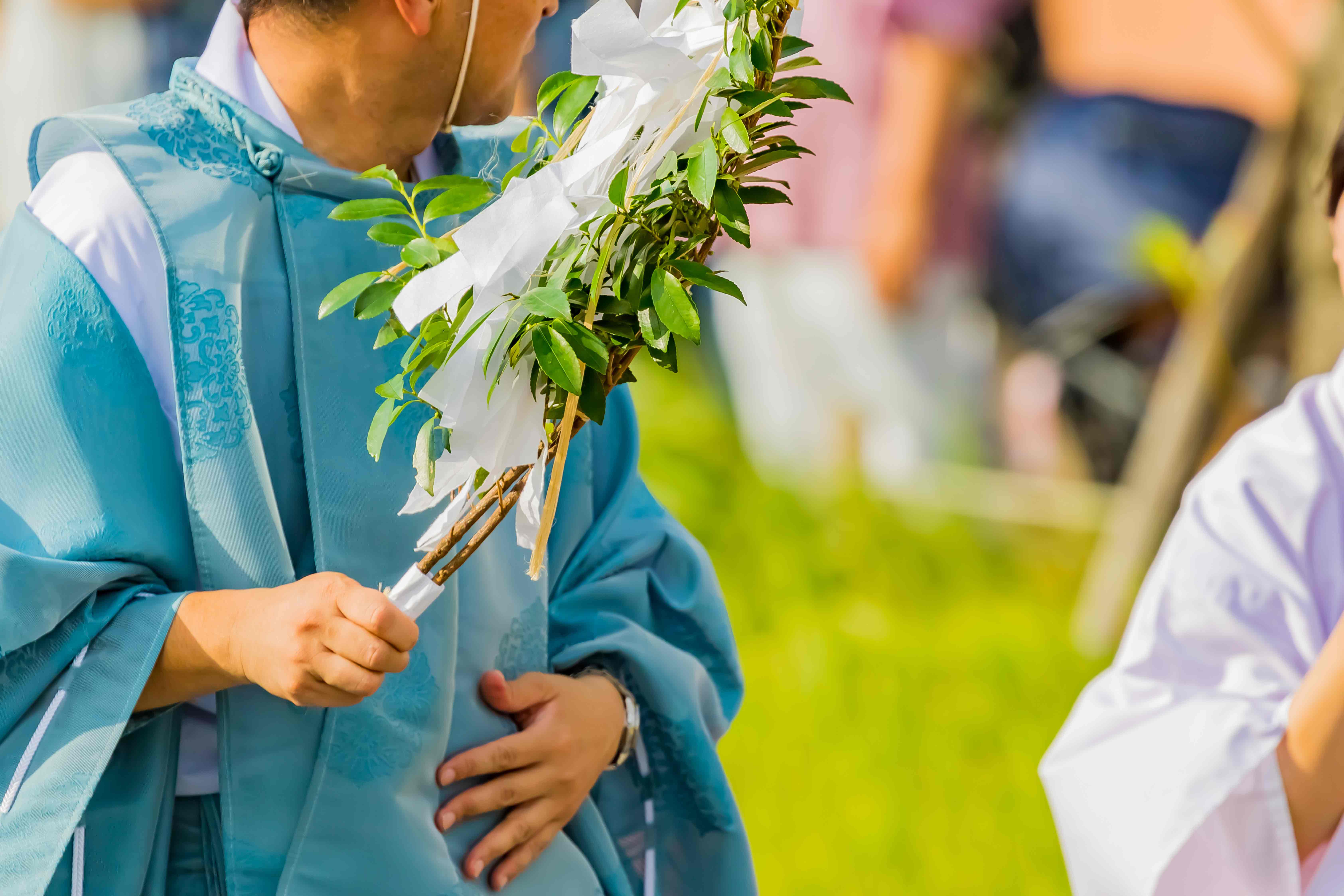 In Japanese Shintoism, anything that has a negative influence on one’s surroundings, body or mind is called “Fujyo”. The “Fujyo” refers to all that are not good, such as sin, impurity, evil or misfortune. In Japanese, it is also often called “Yaku”. (※”Fujyo” and “Yaku” are written in Kanji characters for “不浄” and “厄” respectively) Illnesses, injuries, and accidents/incidents are included in this “Fujyo”. It includes all the negative economic effects of daily life, such as poor harvests and poor fishing, as well as natural disasters such as typhoons, earthquakes, or epidemics. In Japanese Shinto, the “Fujyo” is used to describe all kinds of “bad or evil influences” for individuals, their acquaintances, and the world in general. The purpose of “Harae” is to remove or get rid of these “Fujyo” from time to time or on a periodic basis, so as not to be tormented by negative influences or bad thoughts for the time being. The word “Harae” is the official, but it is more commonly known as “O-Harai”. Shinto shrines are responsible for conducting the rituals for these “Harae” purifications. In all Shinto rituals, the removal of “Fujyo” is considered a very basic or regular ritual. There are some rituals whose main purpose is “Harae” itself, but in fact, all of Japanese Shinto rituals always include this ritual of “Harae”. There are two types of Shinto rituals: those that are performed seasonally, and those that are performed irregularly at the request of individuals or groups / organizations. The former is regarded as an annual event of each shrine, and it is held for the benefit of the local community, the entire Japan country, and the entire world. (※For the major annual events at the shrine, please refer to the article for “Jinjya shrine” in this website) There are also some famous ritual events that are held as local “festivals” and attract many tourists. On the other hand, the rituals that are held at the request of individuals or groups / organizations are the “Harae” rituals that are more commonly known or seen. Some of these “Harae” are performed as a prayer for peace and safety in a Shinto wedding ceremony. Some of them are also held to pray for good luck and prosperity at the beginning of the year for companies or other organizations. The rituals that are held at a construction site is generally called “Jichinsai”, this is mainly to greet the gods of the land and pray for the safety and security of the construction work. As for the “Harae” that is held according to the needs of the individual, it is called “Yaku-Harai” or “Yaku-Yoke”. In Japan, there is a belief that around a certain “age”, people are more likely to experience negative influences on their surroundings, body and mind. Those “age” are commonly called ‘Yaku-Toshi’ in Japanese. “Yaku-Harai” or “Yaku-Yoke” are the ritual of “Harae” to be held for removing such a negative influence. Praying to a Shinto altar in a private home is also a type of “Harae”, it is an example of how “Harae” has been incorporated into daily life. Offering “salt pile” is also a part of the “Harae” ritual. And many of the traditional practices such as “practice superstition” and “lucky charms” in Japan, are also considered as a kind of “Harae”.

“Harae”, as you can see, is very prevalent in the Japanese culture. There are many things that Japanese people are no longer aware of as a type of “Harae”, but they have become part of their daily habits. It may be one of the concepts that reflect Japanese values and ideology very well.