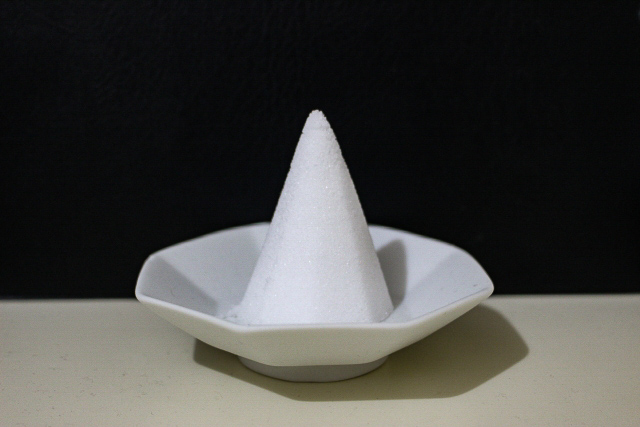 Have you ever seen salt on a plate placed at the entrance or exit of a house or building? In Japan, you can sometimes see them in kinds of restaurants or inns. You may see the same kind of thing in ordinary private homes. This is called “Salt piles”, it is one of the Japanese customs to carry good luck or to ward off bad luck. In Japanese, it’s called “Mori-shio”. There is a record that this custom was already practiced in the Nara period (about 1200 years ago). It was the era when Buddhism was first introduced to Japan. Later on, Buddhist culture and Shinto culture would become intricately related to each other over a long period of time. For this reason, there are many theories about the origin of the custom of “Salt piles”. Well, it is said that it’s probably based on the “Shinto rituals” that are performed.

Salt has been a very important resource in many parts of the world. Well, salt is a universal necessity, you know. Securing regional bases where salt can be produced, such as rock salt mining areas and oceans. Development of salt manufacturing technology. The development of distribution channels for transporting salt, and so on… It is an important resource that has been very closely related to the development of civilization in that country or region. So it was the same in Japan. Especially in Japan, it has been regarded as a sacred object as well as a necessity for our daily lives. In “Shinto”, the term “Kegare” refers to all things that are not good or bad. If thinking of it as “impurity”, it might be easier to understand. The rituals and ceremonies called “Shinto rituals” are performed to purify this “Kegare”. The purification of this “Kegare” was considered the same as reverence, awe and gratitude to the gods, right? Therefore, anything that was used to purify this “Kegare” (something that was believed to have the power to purify and cleanse impurity) was treated as sacred. And they have always considered “salt” to be one of them. “Sumo wrestling” was originally one of “Shinto rituals”. The salt that is sprinkled by the wrestlers during the ring-entering ceremony is also used to purify the “Kegare”. In other words, “salt” is a very powerful item to ward off evil. Actually, it also has antiseptic / sterilizing / dehumidifying effects. If we can keep bad things away from us with “salt”, it means that we can attract good things to us. Wow, this is good luck…! Perhaps such a way of thinking led to the concepts of “prosperous business” and “a thousand customers”. Nowadays, it is used as an interior decoration of a room. You can also buy stylish small plates and molds for making “Salt piles”. There are also colored “salts” based on “Feng Shui”.

However, we would like to remind you of a few things about “Salt piles”. In order to get the original effect of exorcising “Kegare”, you would do well to make your offerings in a suitably proper manner. “Salt piles” is still a kind of sacred ceremony / ritual, right? Well, there are many different ways to do this, and it can be a bit confusing… What all of these manners have in common is that you should properly respect and appreciate them. “Always keep the area where “Salt piles” are placed clean, replace the salt frequently, etc… Yes, it’s obvious, isn’t it? However, if you make it a habit to do so, you will naturally be able to keep your surroundings clean. As a result, it seems to mean that our daily lives will become cleaner. We guess that’s why they started to adopt “Salt piles” as a custom.

Funerals in Japan are based on “Buddhist rituals”. It is the ritual that was created by incorporating Buddhist culture into the original funeral ritual. One of the rituals in the ceremony is called “Salt for purification”. In Japanese, it’s called “O-Kiyome-Shio”. “Shio” means “salt”. After attending a funeral, people purify themselves by sprinkling salt on their bodies. “Death” is an event that brings sadness and loneliness, so it was considered an “unfortunate” event. And it was believed that such “unfortunate” would attract kinds of “Kegare”. As we mentioned above, today’s Buddhist funerals in Japan are funeral rituals created by a complex mixture of Buddhist and Shinto cultures. This “Salt for purification” is a clear indication of that.