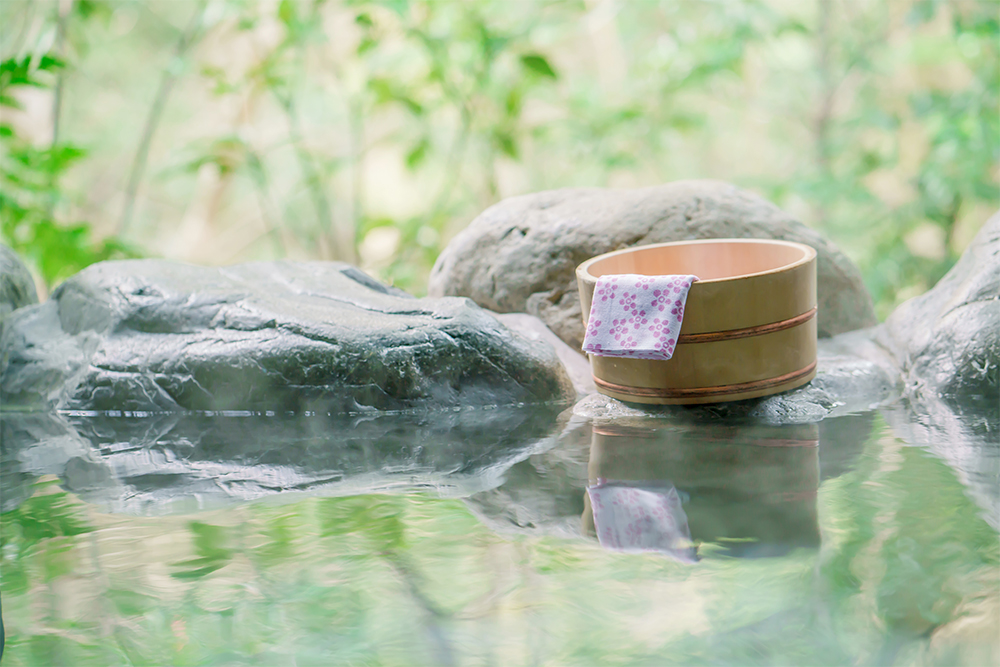 As far as the world of onsen is concerned, we can safely say that Japan is the leading country. Regardless of age and sex, onsens are a popular spot amongst Japanese people. Hence why we would like any traveler to Japan to be familiar with this part of Japanese culture.

We are going to introduce Japanese onsen culture to anyone who would like to know more about it.

It is no overstatement to say that the Japanese archipelago is a volcano itself. This is due to Japan’s position, lying on the circum-pacific orogenic belt. To start with, in Japan there is an incredible number of “onsen”, Japanese hot-springs. The first character of the word expresses the concept of “hot”, the second one means “fountain”, therefore describing the nature of onsen, a pond of hot water. In Japan, there are over 27000 sources of hot spring water and 3000 onsen spa with accommodation. Onsen hot springs are scattered throughout the country.

Nonetheless, the culture of taking baths became popular not so long ago. Though bath-houses open to the public are a longstanding tradition in Japanese history, the use of the bathtub was popularized only 200 years ago. In fact, in the Edo period, immersing oneself into the bathtub became a popular habit for the masses. Also, it was just half a century ago that every house was provided with a bath. Onsen, also in the past, was believed to be a healing place so a lot of modern onsen take the name of “hot spring-cure”. In the Sengoku period (1460-1600), various samurai families took baths in (privately owned), secret onsen. Only after the modernization of Japan that came across with the Meiji revolution, onsen opened and developed into the facility we are used to today. Onsen became popular and developed to the point that it is now considered a travel destination by many people.

For Japanese people who normally like being immersed in the bath, onsen is, of course, a popular spot. That’s why there are so many onsen with a variety of devices that aim at the customers’ satisfaction. It’s hard to tell what a good place to go to is, or which one is recommended. The best you can do is going and checking for yourself! That said, from now onwards we are going to speak about things that you can always enjoy, no matter what onsen you visit.

・Onsen manju
Manju is a traditional Japanese bun filled with bean paste. Onsen manju is a manju that has been steamed near onsen water. It is also the first delicacy you should try once you get to the onsen.

Hot-spring water is used to make the dough. Essentially, the dough is steamed with the vapor of the onsen. If it’s sold at the onsen, then it is an onsen manju. Having something that has been freshly steamed with onsen water is the best you could ever wish for. Definitely give it a try!

・Onsen tamago
“Onsen tamago” is a boiled egg. Also, in this case, it is boiled at the onsen and steamed with onsen water. Depending on the quality of the onsen, there is a subtle difference in the taste, which makes it interesting. Definitely give it a try: you will be able to feel an onsen-vibe in it!

・Bathing mineral powder
Every onsen has its peculiarities. If you would like to make the most of the onsen, we recommend using onsen minerals. Onsen minerals can be presented in various forms such as liquid and fine powder. You can also find special flower-shaped onsen minerals called Yu-no-Hana. Onsen minerals are available on the market more than you could expect and it’s worth a try! We would say it’s a must for who wants to fully enjoy the onsen-mood from different sides.

Well, there is something we cannot overlook when talking about Japanese onsen…
It’s Tattoos.

To date, there are places that forbid the entrance of people with tattoos on their skin. This also applies to other facilities such as swimming pools and water parks. We guess that’s about 50% of onsen hot springs if not more…

The reason for any kind of tattoos being still forbidden in many Japanese onsen is nothing to do with discrimination against people with tattoos but rather a long-standing tradition of associating tattoos with the underground society and gangsters. This doesn’t mean that all Japanese people are frightened at the sight of a tattoo. The rule remaining unchanged in many places is an evident trace left by history. Some people’s attitude towards tattoos is the same that people can have with regards to certain hair color or someone’s garments, people in Japan tend to have towards tattoos. Tattoos are not fully socially accepted also since there is a general tendency to disregard showiness in Japan. Especially for elderly Japanese people, the sight of tattoos can generate fear and wariness.

Nevertheless, recently the number of foreign people who use onsen has increased and the issue has slowly begun to be comprehended. There are places where you can enter the onsen with a tattoo under the condition that it is covered. Yet places that offer this condition are not that many.

In conclusion, if you do have a tattoo, we would recommend checking beforehand whether the hot spring allows it or not. There is always a detailed homepage where you can find this kind of information as well, so do have a look.