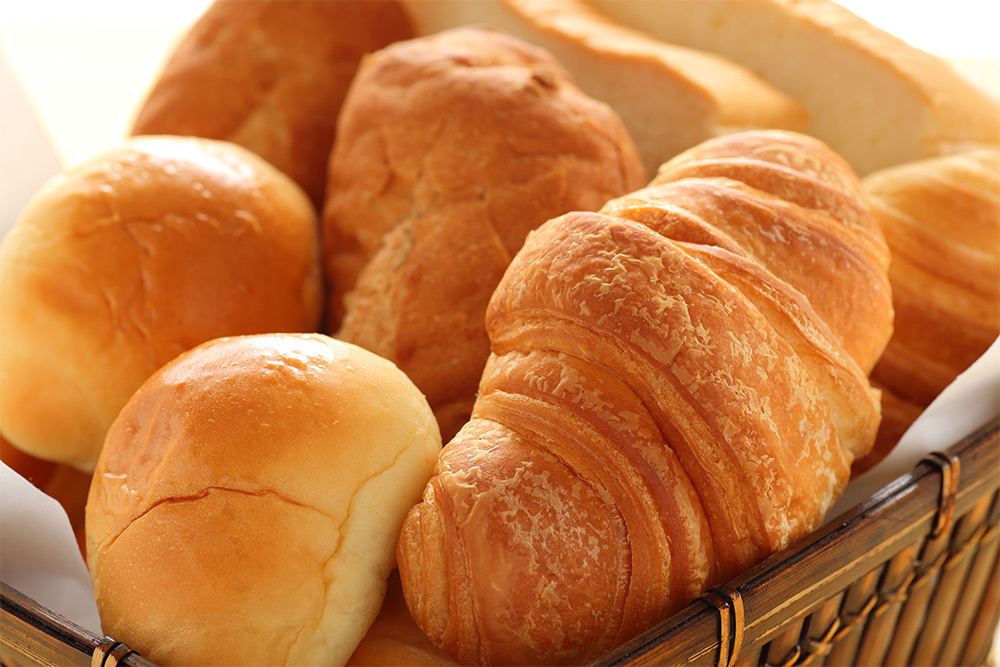 The main grain produced in Japan is rice. So, if we were asked, “What is the staple food of Japan? we would the correct answer would be “rice”. However, we’ve already mentioned in other articles that rice is not really a staple food in our Japanese daily lives. Ramen, Udon, Soba, Pasta, etc… There are more opportunities to eat other grains in the current Japanese food scene. Along with such foods made from grains other than rice, “Bread” is one of the most popular grain foods in Japan’s current food culture. In other cultures, such as Europe and the United States, it is not uncommon for bread to be a staple food, isn’t it? If we try to find out when bread was first eaten, we will find that it can be traced back 13,000 to 14,000 years ago. In areas such as the Middle East and Western Asia, people had already been eating bread made from tree nuts that grew wild before they had even started farming… Around 3,000 B.C., the recipes for bread had already known to people living in Europe and Egypt. It was during the late Warring States period to the Azuchi-Momoyama period, roughly in the latter half of the 16th century, that “Bread” was introduced to Japan. It is said to have been introduced by missionaries from Portugal, and that the Japanese name “Pan” comes from the Portuguese word “pão”. After that, the Edo period had come, and more than 250 years of peace and tranquility prevailed in Japan. But “Bread” has never really been a part of Japan’s food culture at this time in history. Well, perhaps the main causes are that it was not to the taste of the people of that time. This is because something like steamed bread, which is the skin part of “manju”, was very popular. As a matter of fact, it was incorporated into the subsequent production of Japanese sweets “Wagashi”. it was not until after the Meiji Restoration that “Bread” became popular in Japan. With the rapid westernization of our everyday’s lifestyle, “Bread” had become a part of Japanese food culture.

When it comes to “Bread,” which people eat as a staple food, loaf of bread, bagels, baguette, etc. are well known. And these “Breads” are not filled with “fillings”, right? The ingredients, process, texture, and taste of “Bread” vary depending on each country and region, but basically, there are no “fillings” in any “Bread”, right? In today’s Japan, “Bread” is not a staple food, but it is very familiar to the general public. However, we still don’t eat “Bread” along with Japanese side dishes, in general. Eating “Bread” as a staple food is when the food is western style. So, let’s talk about the reason why Japanese people like bread so much that we can’t clearly say that rice is the staple food of Japan. The reason for these will be probably the immense popularity of “Sweet breads” and “Cooked breads” that cannot be ignored. In short, the Japanese have settled on “bread” arranged to their liking, haven’t they? Moreover, there seems to have been various arranges “bread” to their liking as early as around the Meiji era. The trigger was probably something like this… “Bread alone doesn’t taste good, does it?” “Well, why don’t you put in some fillings?” (←It’s a Quick answer) It must have been a flexible idea because it was a time when westernization was rapidly changing our daily lives. In no time at all, “Bread” was accepted in Japanese food scene.

After all these various twists and turns, we can now see many bakeries in Japan. We hear that it is an interesting sight to see so many “Sweet breads” and “Cooked breads” other than “Bread,” which is eaten as a staple food, on display? We’ve heard that it’s quite popular among people from overseas. In fact, when we see it, we get kind of excited. When it comes time to buy, there are so many different kinds of products that we can’t stop looking at. Please be careful when purchasing them. In the following, we’d like to show you some of the “Sweet breads” and “Cooked breads” that are unique to Japan. We hope this is helpful to you～ 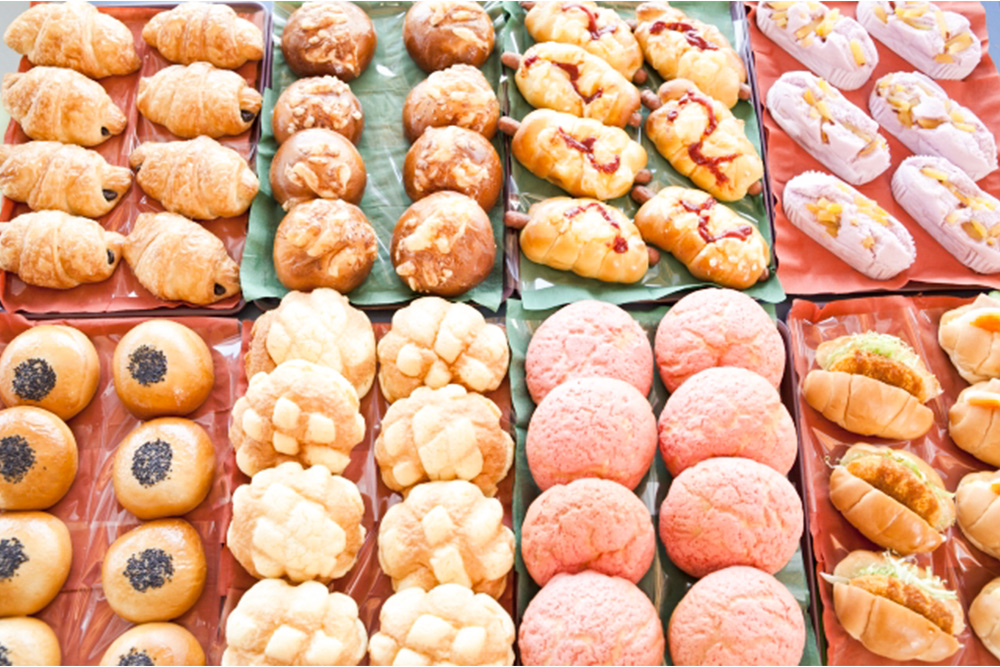 ・Melon-Pan
It is one of sweet breads baked with cookie dough on top of the bread dough. It is said that the name comes from the shape of the baked bread, which resembles a melon. There are many theories about its origin, some of which suggest that it originated in Japan. Originally, “Melon-Pan” did not contain melon juice or pulp. but the name “Melon-Pan” has been followed by the production of other types of bread that use melon as an ingredient. It is one of the most popular sweet breads in Japan, so much so that there are even stores specializing in “Melon-Pan”.

・An-Pan
It contains red bean paste. It also originated in Japan. “An-Pan” was already created shortly after the Meiji Restoration, when Western bread culture first spread to the general public. It is the true ” original” of sweet bread in Japan, we should say. There are still the store where the original “An-Pan” originated. When you actually try it, you will be a little impressed!

・Jam-Pan
It was invented at the end of the Meiji era. The original “An-Pan” was made by “Kimura-ya”, which is a long-established and famous bakery, “Jam-Pan” is created by “Kimura-ya” bakery. Today, the jam used in “Jam-Pan” is usually strawberry jam, but it seems that apricot jam was used until the 1940s. We’re sure the “Jam-Pan” with apricot jam were also very tasty.

・Cornet
It is a sweet bread filled with chocolate cream (or cream) in the cavity of a cone-shaped bread baked like a spiral shell (or horn). The name itself seems to be derived from the Italian word “corno”, but this is also a sweet bread that originated in Japan. It is wonderfully simple looking yet stylish. It makes us envy their naming sense.

・Age-Pan
“Age” is a Japanese word that means “fried in oil. So, “Age-Pan” is a sweet bread which is fried in oil. In Japan, “Age-Pan” is made by baking the bread once and then deep-frying it in oil. The same kind of bread can be found in many areas of the world where “Bread” has been transmitted, right? However, the origins of “Age-Pan” in Japan are completely different from those of other countries and do not originate from overseas. After World War II, school lunches were served at public schools in Japan, and one of the main items on the menu was bread. At that time, just after the war, there was still a shortage of food throughout the country. Of course, sweets or snacks were extremely valuable. Therefore, it was suggested that the school lunches should be as nutritious as possible for the children. By frying it in oil and sprinkling it with sugar, the “Age-Pan” lasted longer and was higher in calories. For the generation above a certain age (especially those born in the Showa era), it is a very memorable sweet bread. 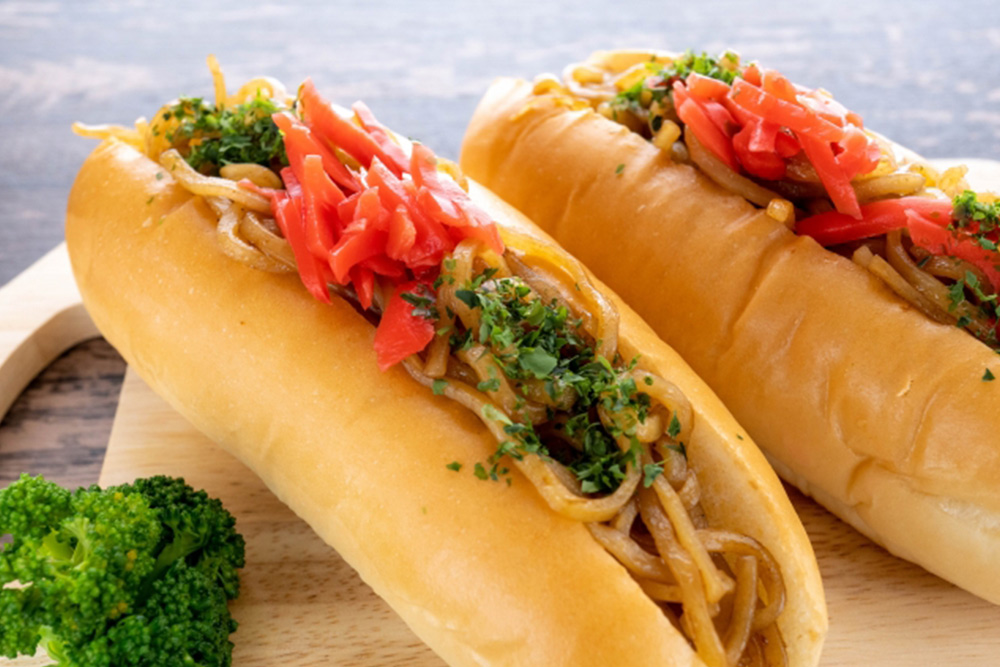 “Cooked breads” are kinds of breads with separately prepared ingredients placed, sandwiched, or wrapped. It’s also called “Deli bread”. (In Japanese, it’s called “Souzai-Pan”) It is very interesting to see that although it is a combination of bread, which originally came from overseas, and a Western menu (or a dish using a Western cooking method), it has been made into something with a very Japanese flavor or taste. We can say that this “Cooked bread” is one of the essence of the “Western menu” that originated in Japan. As well as “Donburi-mono (rice bowl dish)”, Most of the dishes is sandwiched or wrapped in bread in Japan. It’s the same idea as saying that if something can be used as a side dish for rice, it can be used as a type of “Donburi-mono (rice bowl dish)” if it’s served on rice. There are so many different kinds. “If the ingredients are too soupy, just let them go!” “Too chunky? Just make it a little lighter!” As a result of such repeated trial and error, they probably eliminated the ones that really tasted bad. Surprisingly, we guess, there is no kinds of cooked bread with grilled fish in it or wrapped in it.

・Curry-Pan
A major type of “cooking bread” that originated in Japan. It was created at the beginning of the 20th century (around the 1920s). It’s a cooked bread that the curry is put in the bread and then fried. There are also quite a few specialty stores for “Curry-Pan”.

・Napolitan
We put “Napolitan Spagetti” in a bun, HAHAHA! This bread is just like that. !(￣▽￣;)!～

There are many bakeries all over Japan, so if you find one, why not stop by? From the standard ones to the ones that make you “!!” or something that will make you exclaim, “…” We’re sure you’ll enjoy them!