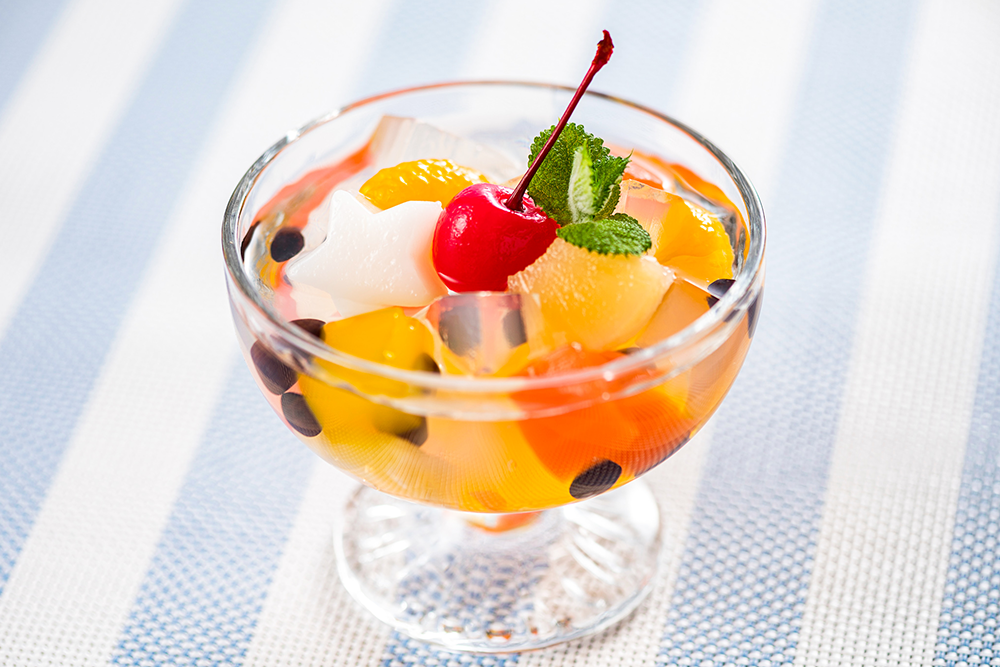 “Mitsumame” is one of Japanese sweet dishes made of boiled red pea beans, kanten agar, gyuhi, and shiratama dumplings, served in a bowl with kuromitsu, molasses, or syrup. It is said that it originated from boiled red pea beans with molasses, which were sold as a sweet at the end of the Edo period. Around the beginning of the 20th century, when coffee shops began to appear in urban areas, other ingredients such as kanten agar or etc. were added, and this became the standard style. Asakusa area is known as the birthplace. Later, canned fruits in syrup such as mandarin oranges, peaches, cherries, apricots, etc. were added as ingredients (“Fruit Mitsumame”), which became the standard. At that time, Japan was undergoing rapid Westernization throughout the country. We were very much influenced by Western culture in all aspects of our living environment, such as clothing, food and housing. By combining the Japanese sweet that had been popular with the common people with new ingredients such as canned fruits and serving it on Western-style plates, “Mitsumame” had become one of the standard dessert dishes in coffee shops. They were more colorful than mochi sweets or manju sweets, so they must have seemed very new to the people of that time. Around the beginning of the Showa era, “Anmitsu” with sweet red bean paste topped with “Mitsumame” was released, and further variations such as “Cream Anmitsu” with ice cream or soft ice cream were added. By this time, it was also being served as a regular menu at coffee stores in major cities other than Tokyo.

Nowadays, there are so many different kinds of sweets that you can easily enjoy them, and so “Mitsumame / Anmitsu” is no longer a sweet that you can eat at any coffee shop. However, “Mitsumame / Anmitsu” is still very popular because it is one of the original sweet that successfully combined Japanese sweets with Western culture. If you find it, please give it a try!!