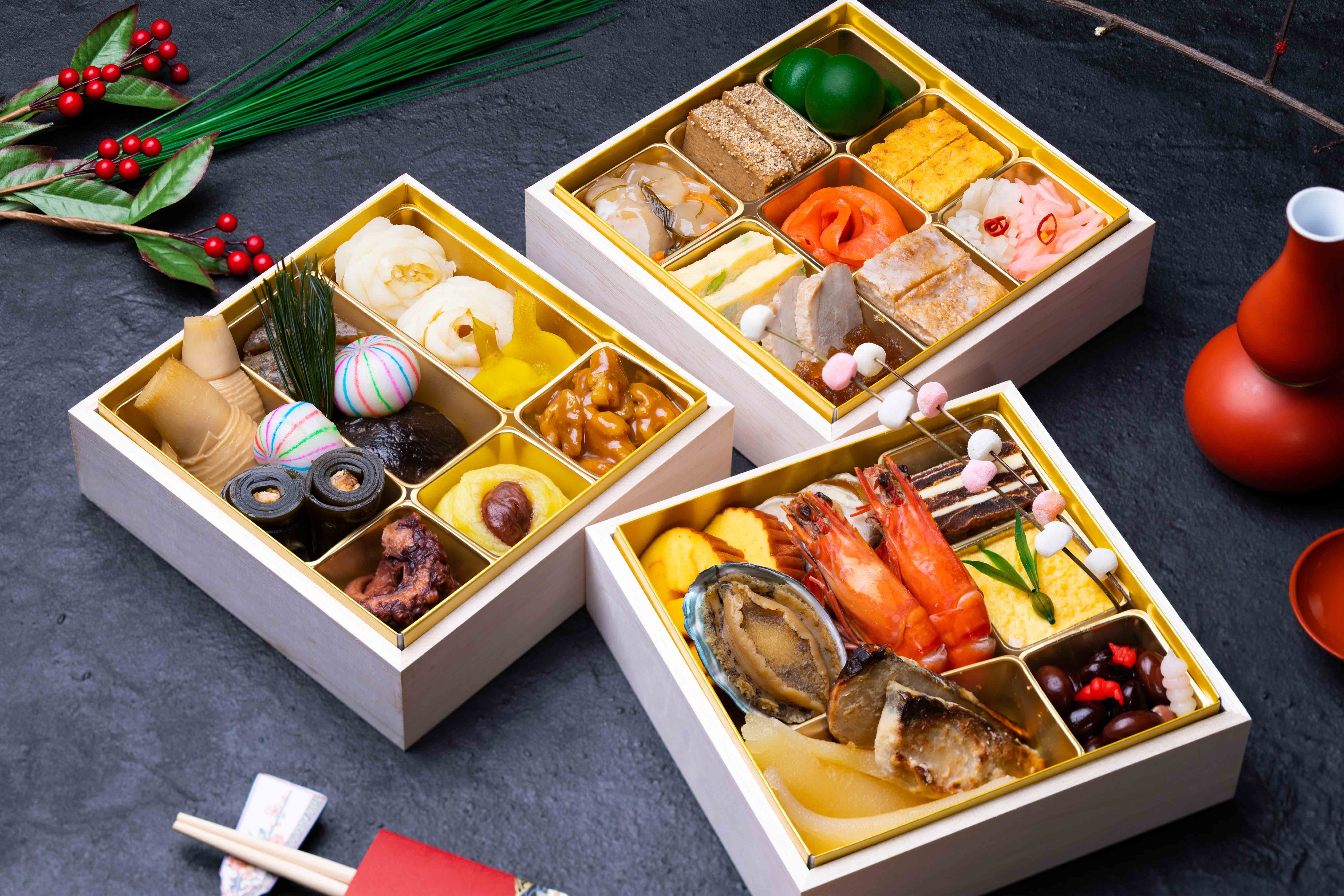 Every country in the world have its own annual events based on the calendar, doesn’t it? There are many such events in Japan as well, of course, and many of the days on which the events take place are national holidays. Since the end of the 19th century, the Gregorian calendar came to be used in Japan. Incidentally, before that, we used the lunar calendar, which was based on the ancient Chinese theory of Yin-Yang and the five elements.

The annual event that is held on the day of the seasonal turning point is called “Sekku” in Japan. And on that “Sekku” day, it is our custom to eat or drink foods / drinks associated with each “Sekku” day. All of the foods and drinks are called “O-Sechi Cuisine”. The most typical of those “Sekku” day is “New Year’s Day”. The “New Year” is the first day of the year. Since everyone prays for “good health”, “peace”, “prosperity”, “good luck”, and “good harvest” in the year, the day was regarded as a very important day. As a result, it is considered that the food eaten on this “New Year’s Day” is now called “O-sechi Cuisine”. We can say that this “O-Sechi Cuisine” is a dish in “Japanese cuisine” that makes full use of a cooking skills specialized in both “preservation” and “seasoning”. “New Year’s Day” is the time of winter in Japan. At that time of year, we had very limited access to ingredients. So, when using out-of-season ingredients, appropriate “preservation” skills were needed. And due to the way they are preserved, many of the ingredients can taste extreme (just like super salty or sweet or tasteless with no water), it was very difficult to make them good taste. Furthermore, since they are cuisines that celebrate “New Year’s Day”… We had to make auspicious cuisines that would bring us happiness or good luck!! With such wishes, our predecessors must have thought hard about that. You can see that “O-Sechi Cuisine” is a very awesome traditional cuisine, right? 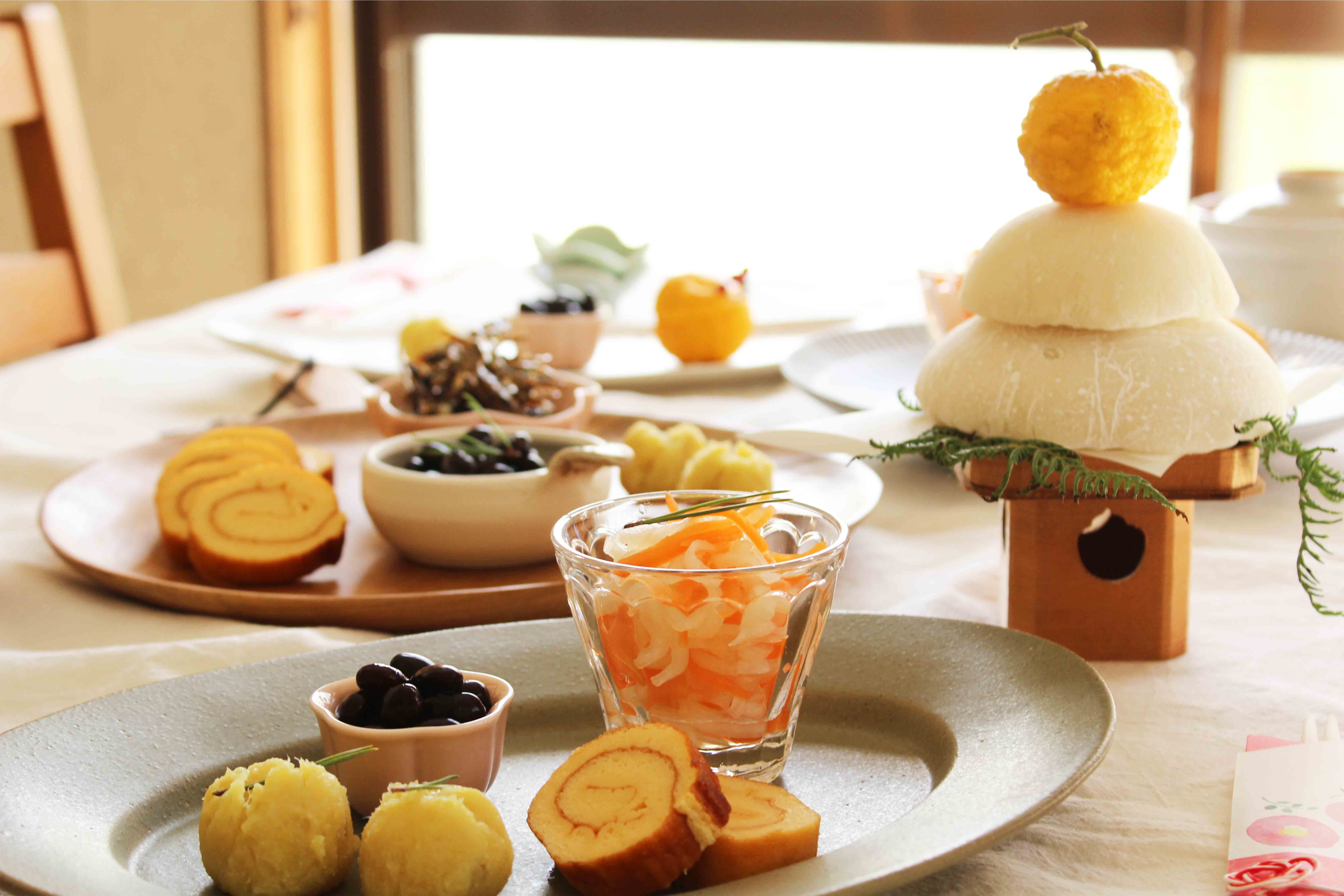 So, naturally, “O-Sechi Cuisine” has a lot of differences from region to region. It is not easy to introduce all of them, so in this section, we’d like you to know the standard composition of “O-Sechi Cuisine”. What we would like to draw your attention to is that each cuisine has some kind of meanings, for example “good health”, “peace”, “prosperity”, “good luck”, and “good harvest” etc. Well, let’s get started, okay?

A “O-Sechi Cuisine” basically consists of the following four cuisines. 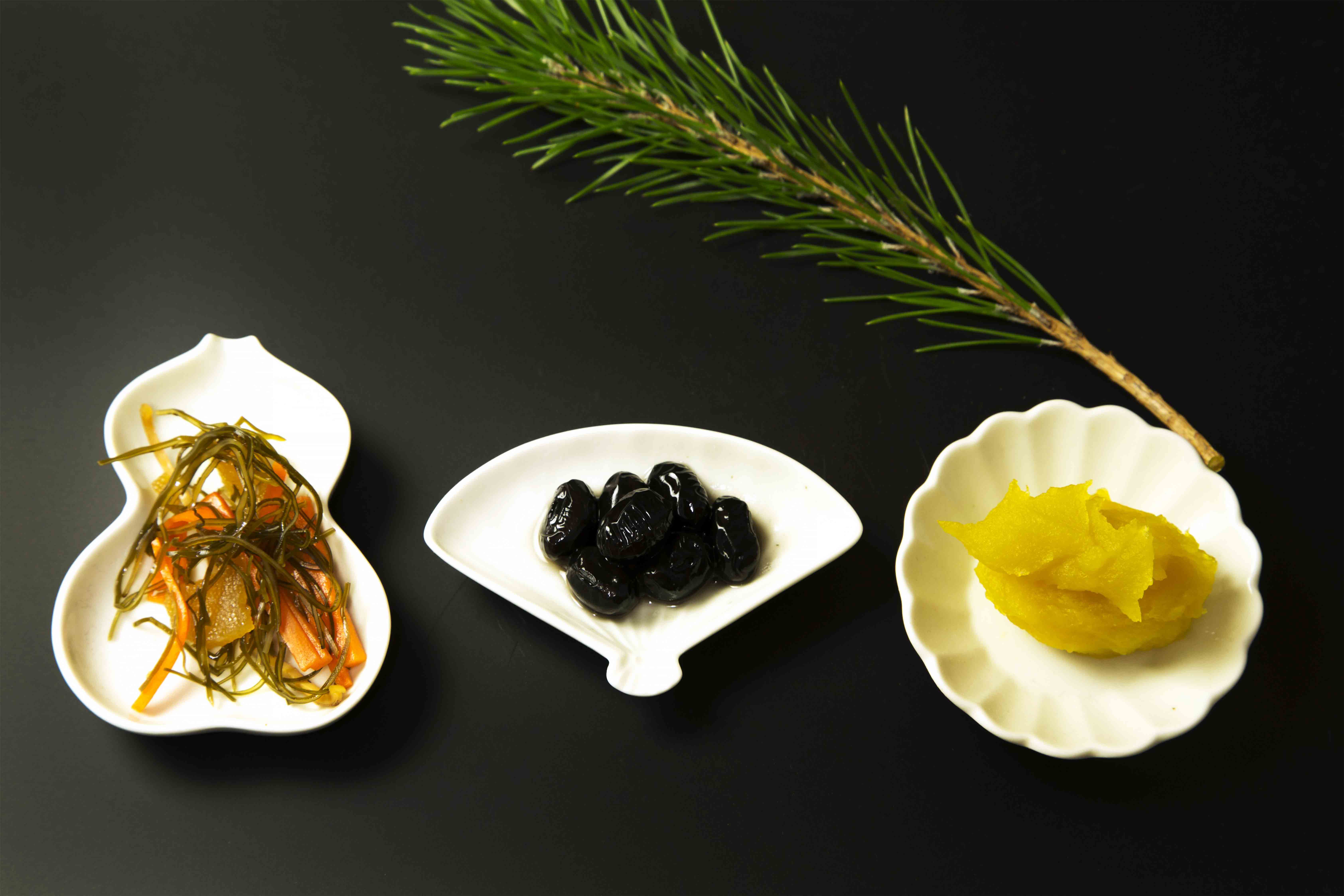 Also called “Mitsu-Sakana (or Kuchitori)”. As in the following examples, there are several dishes, at least three of which should be served. Of course, it doesn’t matter if you serve more than three different kinds. It’s not a problem for many, surely.

・Kuromame (Black Beans)
It is a sweetened black bean stew. In Taoism, black is considered the color for protection from evil spirits. Meaning “good health”.

・Otafuku-mame (Beans for so much of good luck)
A sweetened kidney bean. Meaning “much luck or good luck”.

・Kurikinton
A salad of sweet potato bean paste and boiled chestnuts. Also called “Kachi-kuri”. The word “Kachi” means “victory” in Japanese. The color of this dish is gold, which means money luck.

・Kazunoko
It is a stew of herring ovaries. Due to its large number of eggs, it means “good harvest” or “prosperity of offspring”.

・Tatsukuri
The word “Ta” means Japanes “Rice field”. Dried anchovies are roasted and boiled down to a sweet and spicy consistency. It is also called “Gomame”, it means “five-grain good harvest”.

・Date-Maki (Date-Roll)
Omelet (Dashi-rolled-Omelet) made with fish paste and beaten eggs (there are many ways to cook it). Derived from the Japanese word “Date” meaning flamboyant or flashy. And from the shape of the “Maki-mono”, it means to wish for “academic success” etc.

・Kouhaku-Kamaboko (Red & White Kamaboko)
Since the red and white pattern is considered an auspicious pattern in Japan. “Kamaboko”, as you know, is one of the fish surimi dishes. 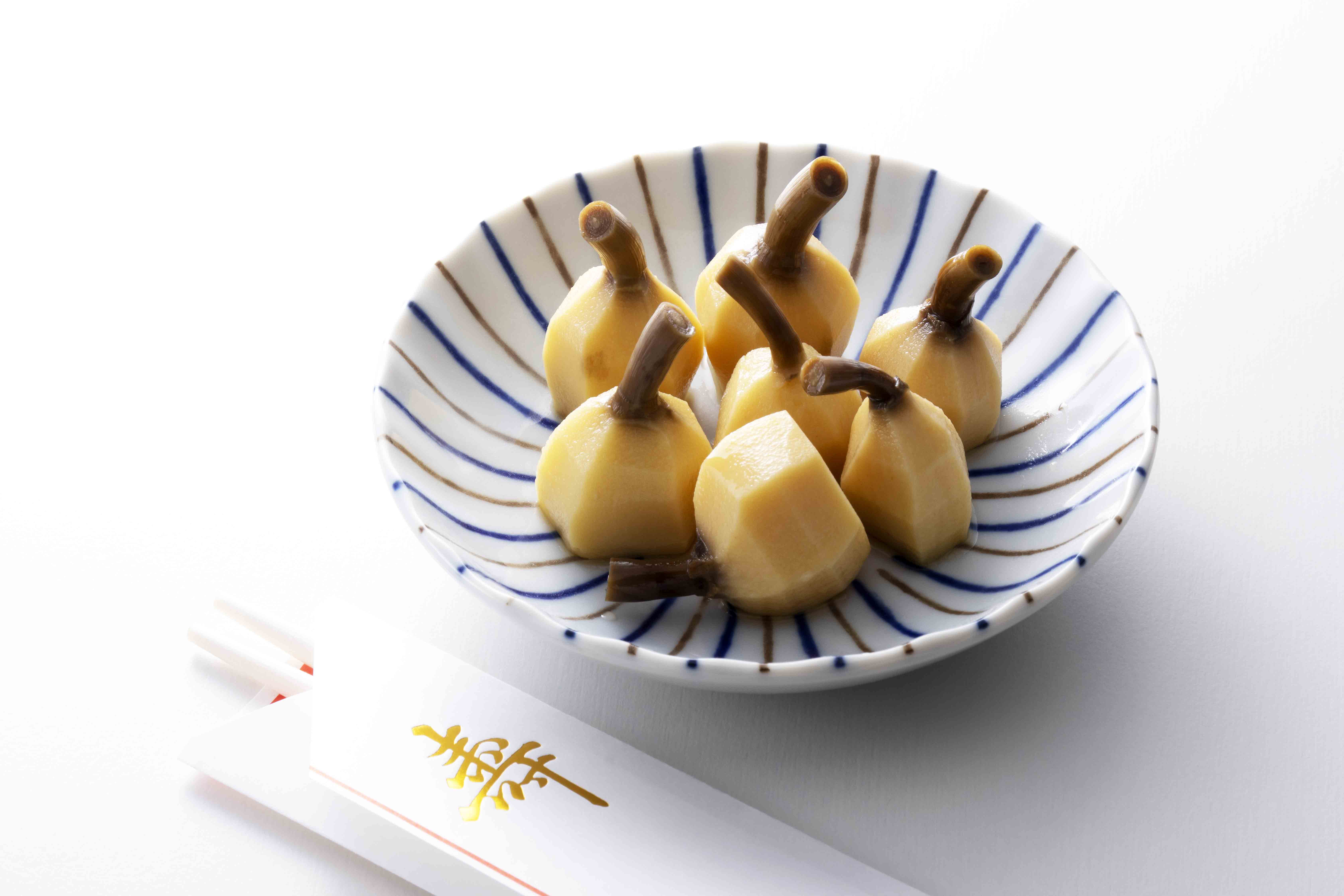 The dish is simmered food. Characteristically, it is cooked down to a simmer so that no liquid remains.

・Nejiri-Konnyaku (Twistted Konnyaku)
It is also called “Tazuna-Konnyaku (Horse’s Reins Konnyaku)”. Because of its rope-like shape, it means to be tied with a good match, in honor of its knot.

・Kobu-maki (Konbu-Roll)
A stew made by wrapping herring, etc. in kelp. Because the word “Konbu”, which means kelp, is similar to the word “Yorokobu (it means happy in Japanese)”, it is hoped that eating the dish will bring you happiness. It also means “academic achievement” from the shape of the “Maki-mono”.

・Takenoko-Ni (a stew of bamboo shoot)
Bamboo is known as a fast-growing plant. Therefore, we wish for “success in life”, “family business prosperity”, etc.

・Yatsu-gashira (a stew of taro)
“Yatsu-gashira” is also another name for taro. This dish is simmered taro. It is our wishing for good children from the shape of many baby potatoes attached to the parent potatoes.

・Kinkan-Ni (a stew of Kumquat)
Kumquat is a type of citrus fruit. In reference to the color of the kumquat or the word “Kinkan” means golden crown in Japanese, it is meant to wish for money luck.

・Jinkasa-Shiitake
Simmered shiitake mushrooms. The shape of the shiitake umbrella looks like a Jinkasa, which is used by samurais to shelter from the rain or sun, wishing for the prosperity of the warrior family.

・Kuwai
“Kuwai” is edible tuber of arrowhead. This dish is a stew of budding Kuwai. From the appearance of large buds protruding, from the meaning of “auspiciousness” in combination with the word “Medetai (it means “auspicious” in Japanese)”. It also means “success in life”. 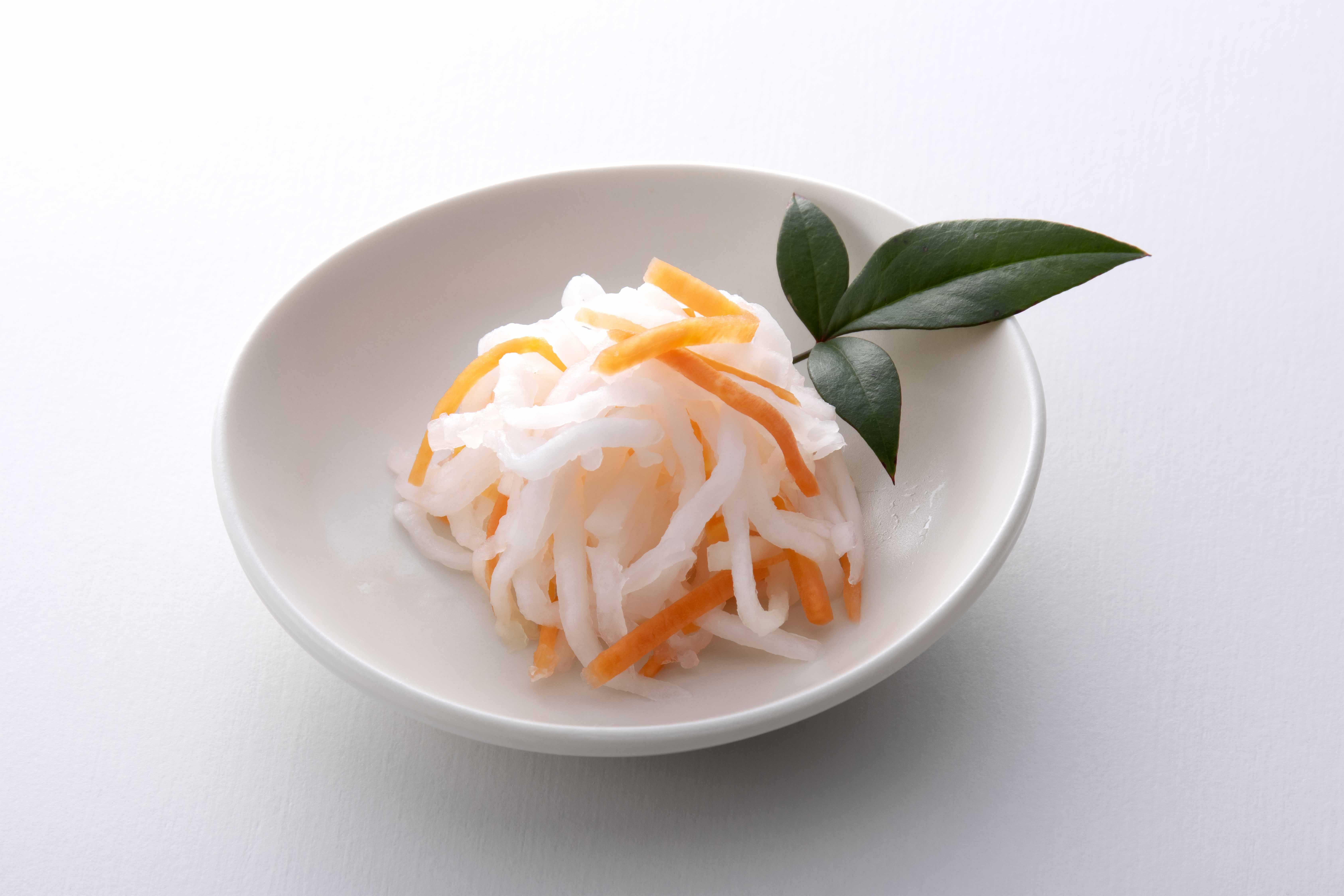 Cooked dishes that can be stored longer with vinegar.

・Kouhaku-Namasu (Red & White Shredded Vegetables)
“Namasu” is the dish that shredded radishes and carrots dipped in vinegar. In Japan, red and white pattern is considered to be an auspicious color scheme that signifies peace.

・Hasu (Lotus)
It is vinegared lotus root. The lotus is known as the flower that blooms in the pond in Paradise, where the Buddha is located. Because of this, it was thought to have the power to ward off defilement. It also means “good future prospects” due to the perforated shape of the lotus root. 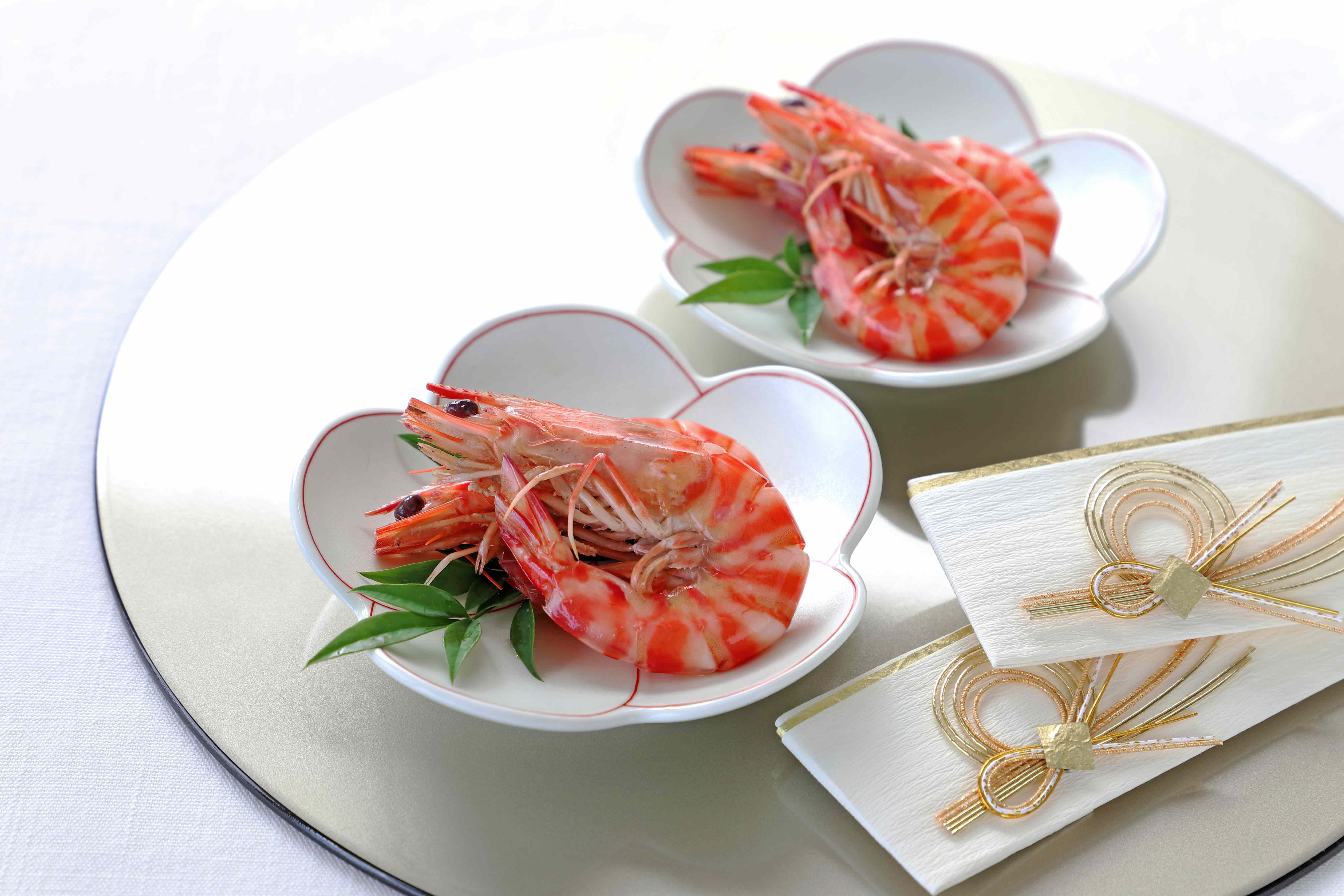 A dish made of grilled seafood and meat. It also includes smoked foods.

・Tai (Red Snapper)
From the meaning of “auspiciousness” in combination with the word “Medetai (it means “auspicious” in Japanese)”. Red snapper is a fish that is often used for celebratory occasions in Japan due to its spectacular appearance.

・Buri (Yellowtail)
In Japan, called name of Yellowtail (or Japanese amberjack) changes as it grows. In the case of Yellowtail, as it grows, its name changes “Mojako” → “Inada” → “Warasa” → “Hamachi” → “Buri”. It is the same true for sea bass and mullet, etc. Since these are considered to be “getting ahead” or “success in life”.

・Ebi (Lobsters and Prawns)
Grilled lobsters, tiger prawns, or prawns, etc. The prawns have long beards and curved waist, right? Due to their shapes, they’re considered good luck charm for longevity. They are also considered to be “getting ahead” or “success in life”.

Well, well… What did you think? Nowadays, it is very hard to prepare all these dishes in each house. So, near the end of the year, you will see more advertisements for the pre-orders of the kumi-jyu (stacked “Jyu-Bako(Box)”) containing these “O-Sechi” dishes. They’re delivered on New Year’s Eve. Of course, their variations are also varied. Their menu can be quite modern, with Western ingredients and the inclusion of non-Japanese, creative cuisine-like dishes. In a way, they are very Japanese styles! In supermarkets and convenience stores, you can even buy every single dish. Many restaurants and hotels offer “O-Sechi Cuisine” as a special menu during New Year’s holidays. It will be a very spectacular look, so it might be the perfect way for you to get into the Japanese “New Year” mood.