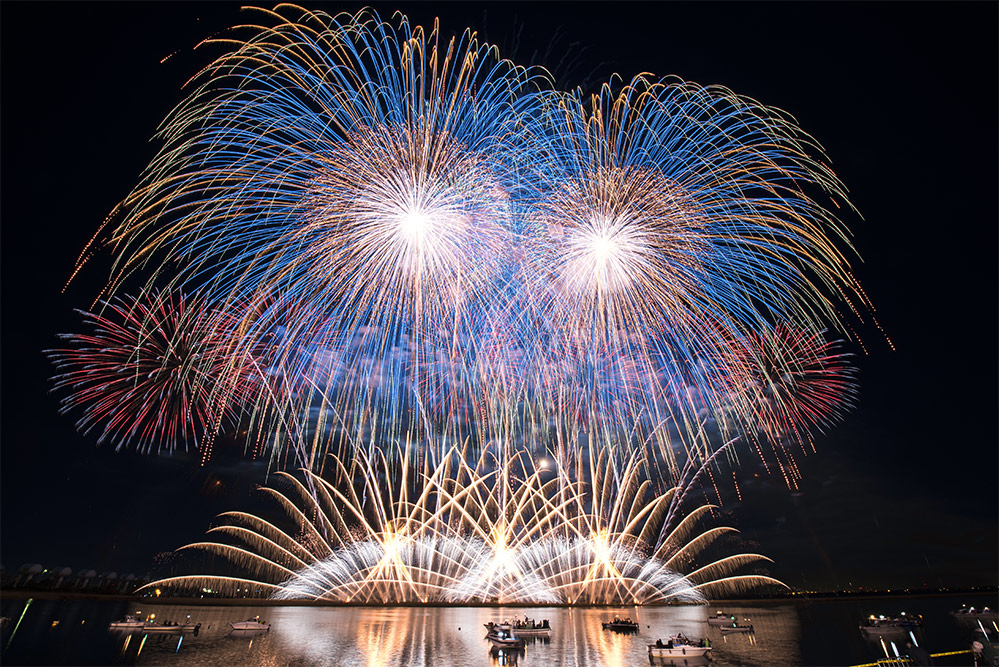 “HANABI”, Japanese fireworks is one of a traditional Japanese summer event. This word “tradition” is what we want you to pay attention to this theme.

In Japan, the record of HANABI being enjoyed as an entertainment dates back more than 500 years ago. It came from the Ming Dynasty at the time. In the beginning, these were events for the personal enjoyment of those in power, but in the Edo period, they became entertainment events for the masses. Thanks to the absence of warfare in the country, you know? It was also around this time that special HANABI makers appeared, they’re called “HANABI-MASTER”, or “Gunpowder-MASTER”. Well… Why did HANABI events come to be held in summer? They say it’s probably due to Japan’s humid climate. It seems that toy fireworks became very popular, not only for big fireworks. Because of that, had resulted in a lot of fires… The houses in those days were all made of wood. In addition, the air was super dry in winter, so the houses burned very very hard. Fires became a specialty of Edo. In Edo, a ban on all fireworks was imposed, except for the HANABI event at the Sumida River. And the fireworks for the masses spread to rural areas as well, HANABI events became to be held all over Japan. The reason why it was widely spread throughout Japan as a entertainment event is because it was a peaceful time. the public could afford to enjoy the events as one of entertainments. You can find that the fact that HAANBI have become a summer tradition in Japan is very important. In Japan, we have “O-bon” in summer. In this season, we enshrine the ancestral spirits. Today’s summer HNABI events also include a sense of gratitude to them.

On Saturdays and Sundays in July and August, HANABI events are held at various locations throughout Japan. There are a truly amazing number of events! Some HANABI events have about five hundred fireworks, while others have more than 10,000 fireworks. Please take a look at them. You’ll be able to find why we’re using the name “HANABI” instead of “fireworks” this time. HANABI, the flowers come and go in the sky after the rain… It’s so amazing, isn’t it?

At a HANABI event, you might hear the following shout, “Ta-ma-Ya～” or “Ka-gi-Ya～”. Umm, you may not hear much about it these days… “Ta-ma-Ya” and “Ka-gi-Ya” are each of the trade name of the famous HANABI makers mentioned above. Each of two was a shout of praise for a brilliant “HANABI”. So it’s now a shout call of praise that is used by HANABI makers regardless of their trade names. Please join us in shouting at the HANABI events. It’s a good time, why don’t we practice the shout together? Ready? Everybody Say!!