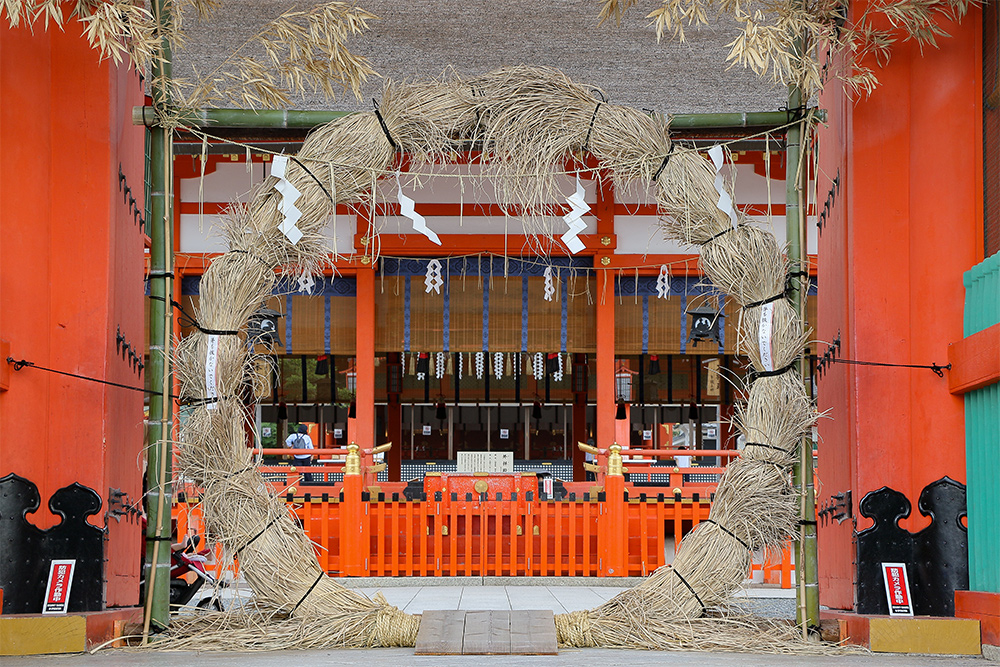 The belief in “Japanese Shinto” is based on the thought of “Nature worship”, which says that gods dwell in all of nature and all events, and even in things created by human hands. That means that gods dwell in all things that exist in the world. In general, however, the belief in Japanese gods in Shinto is different from other religions. To call it a religion probably has a different implication, we might as well say. Of course, not all of them are the same (※There are also Shinto sects that have their own “founder” and “precepts”). There is no such thing as a “founder” or a “precept”, so the word “follower (or believer)” doesn’t really fit either. It may be just a thought of paying respect to “all things” around us in the world. Therefore, in Japanese Shinto, the beliefs of other religions are also to be respected.

The “sacred object” in which these Japanese gods dwell or descend is called “Go-Shintai”. And this “Go-Shintai” is actually a “thing”. It could be a stone, a mirror, a sword, a bill, etc… It is different from so-called “idols” because it is not an imitation of god’s likeness. This “Go-Shintai” is not a place where gods dwell or descend at any time. The Japanese gods are found in everything and everyone in this world. In other words, we don’t know where you usually are. Then, even if we pay our respects, we might end up bowing in a direction where the gods are not present, and that ways would be rude, right? To avoid such rudeness, “Go-Shintai” is the place where the gods “sit” when we pay respect to. Therefore, it is not something that can be treated with no respect. A “Jinjya shrine” is a facility where such a “sacred object” is enshrined. The gods enshrined in shrines are called “Saijin”. Since shrines are a place to enshrine these “Saijin”, they are separated from the place where people live. Shrines are generally composed of the following facilities.

Facilities in the Shrine

・”Shinden”:
Also called “Honden”. The building in which the “sacred object(it is called “Go-Shintai”)” is enshrined.

・”Haiden”:
A building for worshipping the “sacred object”. There is a “Bell” for invoking the enshrined gods.

・”Saisen-bako”:
It is a Money box. The box in front of the worship hall where you can put your money.

・”Kaguraden”:
A building where “Kagura” is performed during a ritual events. Kagura is a special kind of dance and music performed to the gods. If it is not open to the public, it may be performed in the “Shinden” or “Haiden”.

・”Komainu”:
The guardian dogs or other animal statues. These animal statues are placed to just like protect the “Shinden” and “Haiden”. In addition to these guardian dogs, there are also foxes and lions (called “Shishi”). In addition, most of these guardian dogs are paired, but one of them is actually a “Shishi”. The one on the left side of the “Shinden” with its mouth closed is the “guardian dog”. The servants of the “Saijin” are called “Shinshi”. In some cases, animal statues are placed to imitate them. The animals used as “Shinshi” vary depending on the shrine, such as foxes, monkeys, snakes, doves, raccoons, wolves, cows, etc… It is not necessarily the case that “Shinshi” = “Komainu(guardian dogs)”.

・”Temizuya / Chozuya”:
A place for worshippers to wash their hands and rinse their mouths.

・”Torii”:
This is the entrance gate to the shrine. Essentially, the structure and shape are different depending on the deity being enshrined.

・”Sando”:
The path leading to the shrine and to the “Honden” in the site of the shrine. It is also God’s pathway.

・”Chinjyu-no-Mori”:
Shinto shrine forest is usually called “Chinjyu-no-Mori”. A forest that surrounds the precincts of the shrine. It sometimes indicates the boundary between the human world and it.

※Some of them do not exist due to geographical reasons or the size of the site.

Throughout the year, various events are held at shrines to enshrine the gods. These events are called “Saishi (it means the shinto rituals)” and the “Kannushi (Shinto priests)” conduct them. “Kannushi” is the name of the role in the “Saishi”. A “Guji” priest is a person who is in charge of a shrine. Whenever a ritual is conducted, the “Guji” priest usually plays the role of “Kannushi”.

January
・”Saitan-sai”:
The ritual is held on the first day of the year to pray for a good harvest, national peace and to purge natural disasters of the year.

・”Genshi-sai”:
This ritual is held on the third day of the first month of the year. It is based on Japanese mythology and celebrates the creation of the country of Japan.

February
・”Setsubun-sai”:
This ritual is held the day before “Risshun”, the day before the first day of spring, and is often accompanied by “Mame-maki(bean-throwing)” and rituals to ward off bad luck.

・”Kigen-sai”:
The Kigen-sai is a ritual held to celebrate the founding of the nation and to pray for national peace with no threats.

・”Kinen-sai”:
It is also known as the “Toshigohi-no-matsuri. This is a ritual to pray for a good harvest.

March
・”Shunbun”:
The first day of spring is called the “Shunbun”, it means the “Spring Equinox”. (The “Autumn Equinox” in autumn is called the “Shubun”) The three days before and after the vernal equinox and the autumn equinox are called “O-Higan,” and rituals are held to honor ancestors.

April
・”Haru-Matsuri”:
It is a ritual to celebrate the beginning of the year’s farming. The name varies. The main purpose is to pray for a good harvest.

May
・”Taue-Matsuri”:
“Taue” means the rice planting. This is a ritual to pray for a good harvest, especially of rice. There are many names for the ritual events.

・”Natsu-Matsuri”:
The rituals in summer. It is a ritual to pray for the quelling of natural disasters such as epidemics, pest damage, and wind and flood damage. The name of the festival still varies.

August
・”O-Bon / Mi-Tama-sai”:
It is a ritual to welcome the “Mi-Tama(spirits of our ancestors)”, comfort them and give thanks to them. “Bon-Odori” is a part of this ritual.

September
・”Kangetsu-sai”:
It is a ritual to pray for a good harvest before the harvest of crops. Many of the rituals pray to the moon or are related to the movement of the moon.

・”Shubun”:
The “Autumn Equinox”. As with the “Shunbun(Spring Equinox)”, rituals are mainly held to honor ancestors.

October
・”Aki-Matsuri”:
These are a ritual to express gratitude for the harvest. Each of them various names and contents.

・”Kanname-sai”:
This is a ritual held at the “Ise-Jingu Shrine” from October 15 to 17 to present the year’s harvested grains to the goddess “Amaterasu-Omikami”. It is a ritual to express gratitude for the bountiful harvest of crops.

November
・”Niiname-sai”:
This is also a ritual to express gratitude for the bountiful harvest of crops.

The ritual events that take place at Jinjya shrines are deeply related to Japanese customs and seasonal events. Well, after all, there are gods in all things, so shrines are considered to be very sacred places for Japanese people. As we mentioned above, they have some different kind of meanings and atmosphere than other religious facilities, but they are not places where you can make a lot of noise. Please be aware of that.