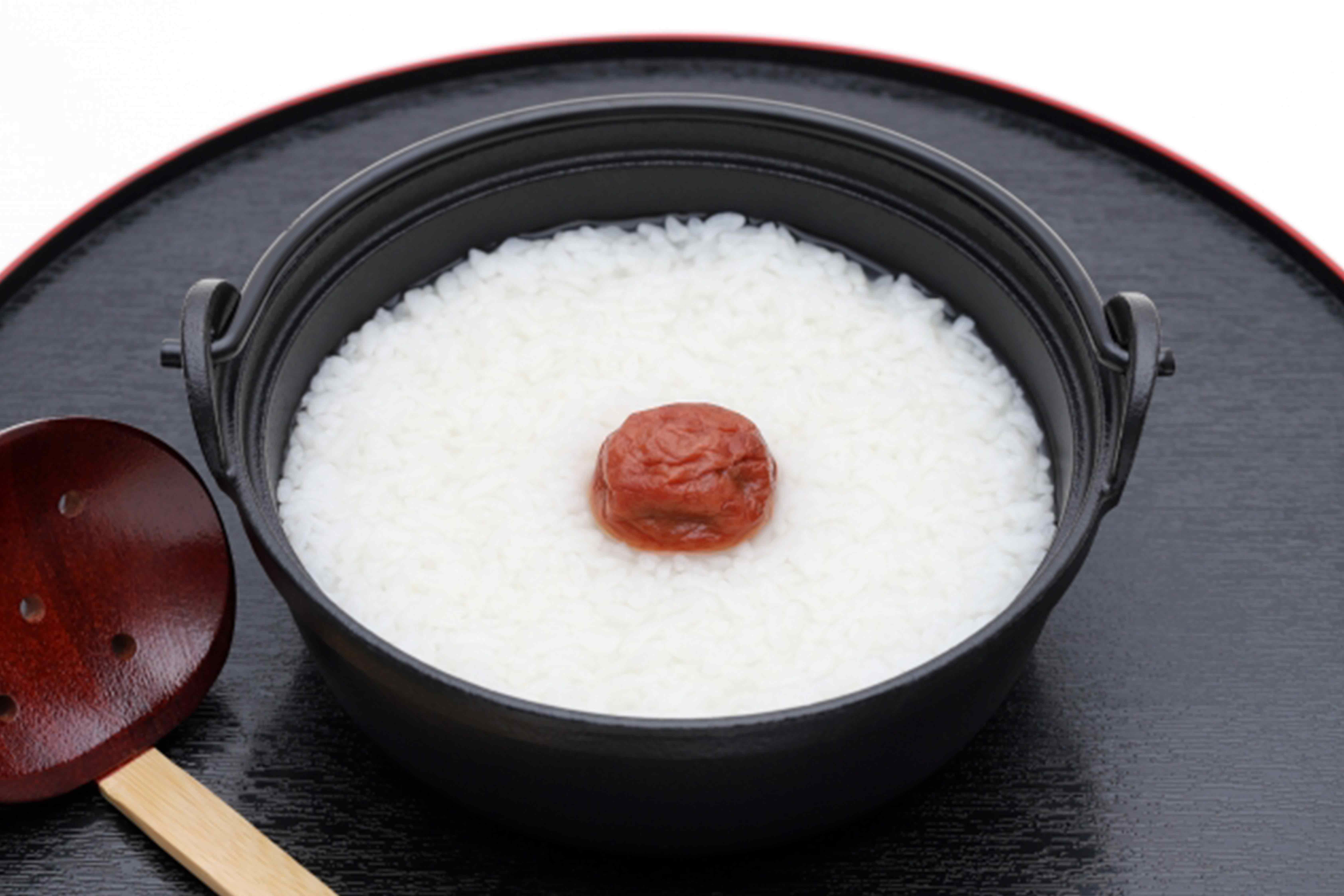 It is a simple dish made by boiling down grains such as rice (Uruchi-rice), wheat, millet, buckwheat, beans, potatoes, etc. with a lot of water. Various grains are eaten as staple foods in many parts of the world and many of them are prepared in the same way, you may know that. There are many delicious looking things, don’t you think so? Of cource, Japan is no exception, as rice has always been a staple food in the country. “O-Kayu (Rice Porridge)” has been widely eaten since the beginning of rice cultivation. There are two ways to cook “O-kayu”: from raw rice or from cooked rice, both of which are called “O-kayu”. In particular, the latter cooking way has been used as a technique to make hardened rice taste good again. “Zosui” and “Ojiya”, which are made at the end of “O-Nabe (Hot Pot Cuisine)”, can also be considered as a type of porridge. The advantage of this method of cooking “Zosui” and “Ojiya”, is that it allows for a semi-infinite number of ingredients to be added and further seasoned. Those are up to your likes. As long as you don’t add ingredients or seasonings that have a strong taste or flavor, you can usually enjoy the resulting dish. Kind of curry or bluefish are not recommended as additional ingredients… And please eat it before it gets cold, okay? Or it will taste extremely bad. Well, we can say that “O-Kayu” is a very flexible dish in many ways. In addition more, “O-Kayu” has been enjoyed as an everyday dish, as well as a dish for the sick and as a baby food for infants. In the process of boiling down the rice, some of the rice is dissolved into the supernatant liquid, which is called “Omoyu”. This “Omoyu” has been eaten in Japan since ancient times as a kind of original liquid food. 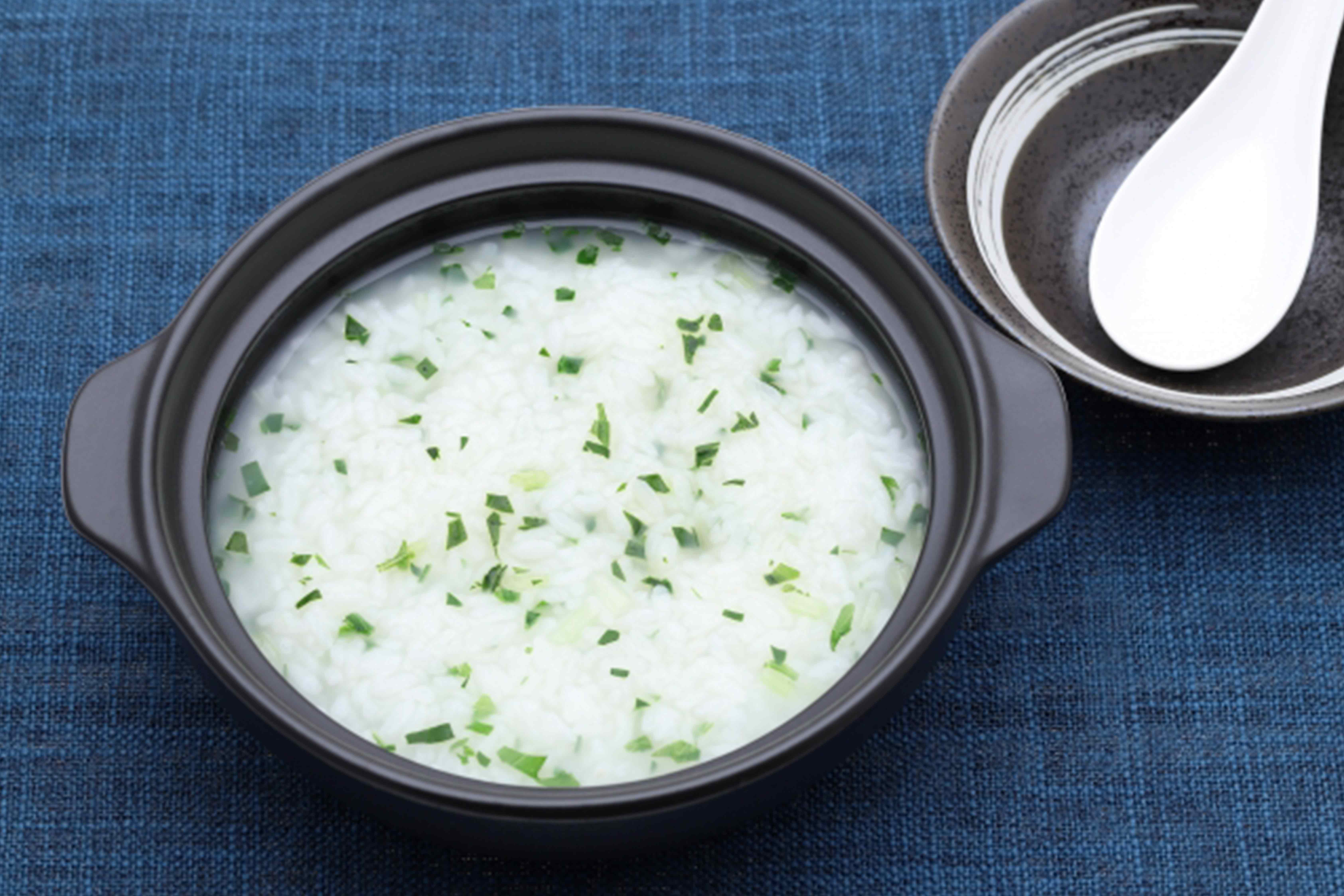 ・Nanakusa-Kayu (Rice Porridge with Seven wild herbs)
This porridge is eaten on the seventh day of the first month of the year to wish for good health for the year. During this time of winter, there were very few vegetables to harvest, right? It is said that the custom of eating porridge with vegetables called “Seven herbs of spring”, which can be harvested even at this time of the year, was established. Well, we should say that these “seven herbs of spring” are more like “wild plants” eatable…) There are seven kinds of plants: Seri, Nazuna, Gogyo, Hakobera, Hotokenoza, Suzuna, and Suzushiro. After the New Year’s holiday, you can see that supermarkets sell packs of these products. In the past, we could find them all in the fields and mountains. It’s a very light porridge that tastes like a “Wild field” itself. Well, the ingredients are just “wild plants”, right?

・Sakura-Kayu (Rice Porridge with Azuki beans)
This is rice porridge with azuki beans, eaten on the 15th day of the first month of the year. It is sometimes called “Sakura-Kayu” because of the light cherry blossom color of the azuki beans. In some cases, the “Kagamimochi” that was offered at New Year’s is also added. This one is a prayer for good health.

・Cha-kayu (Rice Porridge with Tea leaves)
It is one of the typical “O-Kayu” dishes known as traditional local food in several regions, mainly in western Japan. It is said to have been eaten by monks at temples around Nara over 1,000 years ago, and eventually spread in common. The type of tea used is usually “Houji-cha” or “Green-cha”. Perhaps you can make it with other kinds of tea leaf and it will still taste as good.

During the winter season in Japan, many families cook “O-Nabe (Hot Pot Cuisine)”. This means more opportunities to make “Zosui” or “Ojiya” using leftover soup and etc. It’s easy to cook and above all, it’s warm. Perhaps that should be why. This season, many of Japanese feel like we’re eating always kind of “O-Kayu” dishes. Well… As a matter of fact, “I” eat it all the time, thank you. We hope you will all give “O-Kayu” lives a try this winter.