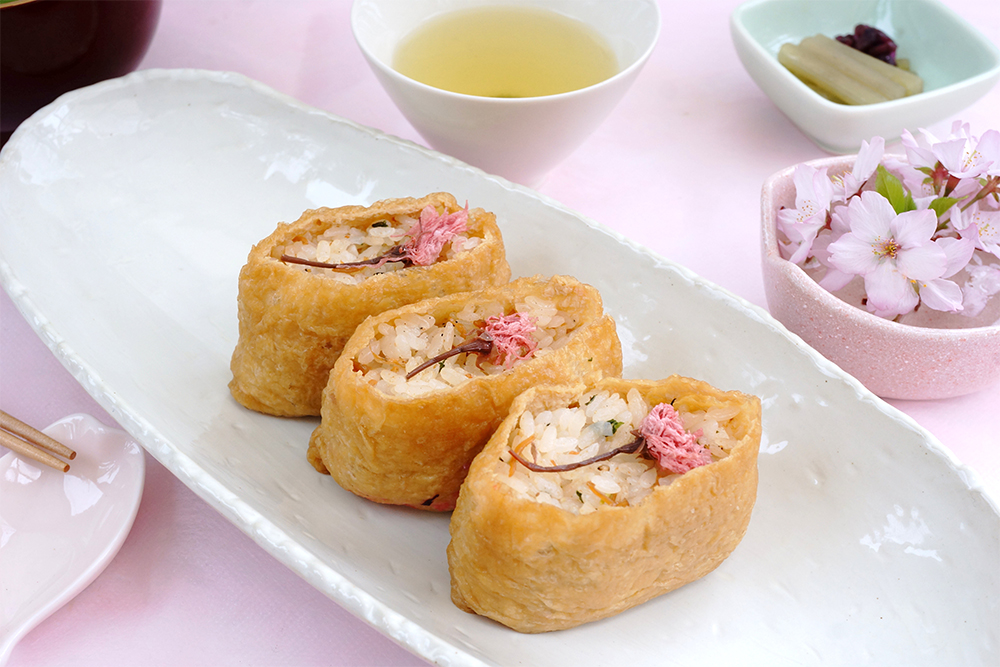 What a pretty sense of naming!!

In another article, we have introduced some of Japanese dishes that will make you wonder, “Why? How did they get that name …?” Even though, depending on our point of view, the names of those dishes may seem like nice names. Well, this time, we’d like to share with you some Japanese dishes / ingredients that we are proud to show you with a great pretty sense of naming. Perhaps they are all dishes/ingredients that you would definitely have to admire someone’s naming sense. After all, whether it’s a dish or an ingredient, its name is very important, isn’t it? The name can change the image of a dish or ingredient, depending on how good or bad it is. And the sense of both the person giving the name and the person receiving the name are very important. If either is missing, it will not be acceptable to the public. Just by seeing or hearing each “Japanese name”, you probably can’t imagine what some of the following are about, or what many of them are about. So, for each name, we will explain its origin and connotation. If you get to know them, you will surely be strangely impressed! 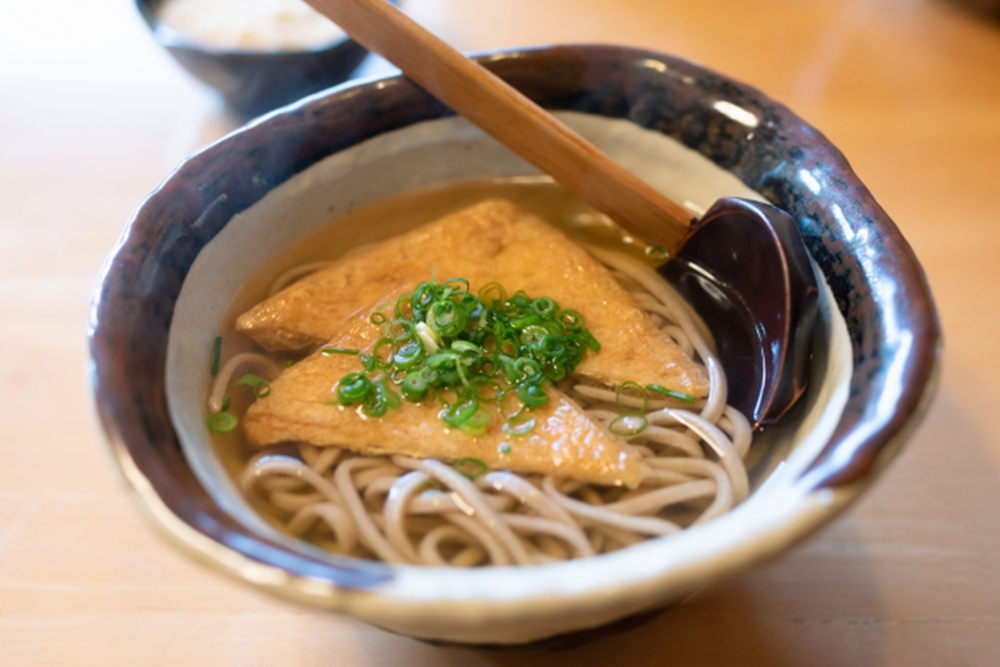 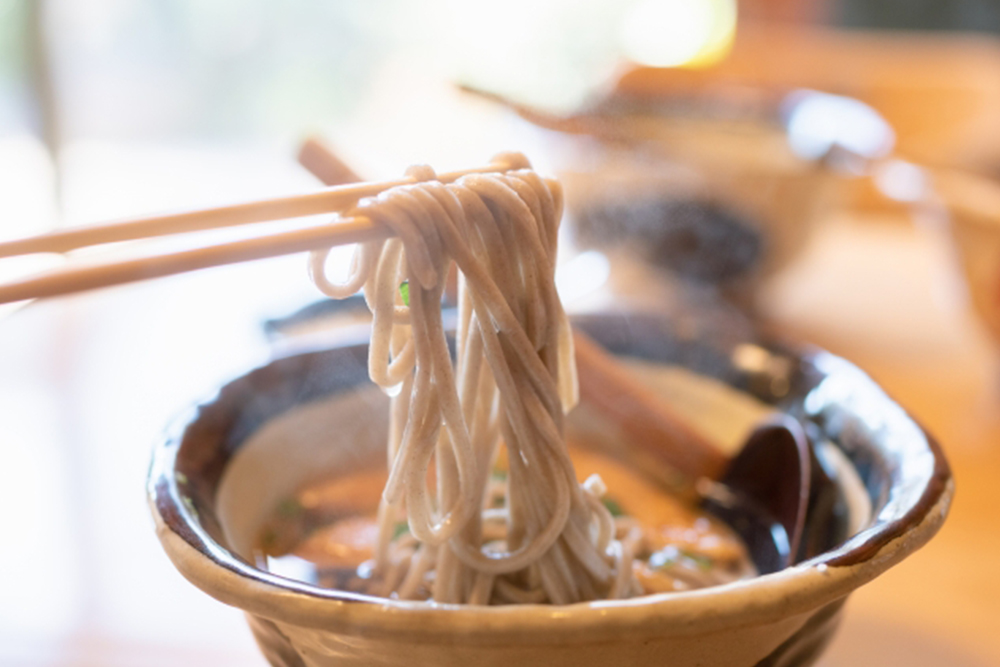 The dish names of the “Soba” or “Udon” are relatively well known even to foreigners. We think these names are more appealing than just “ingredient name + “Soba” or “Udon”.

・Kitsune:
The word “Kitsune” is “fox” in Japanese. It is topped with fried tofu (sometimes boiled sweet and spicy). From the color of the fried tofu resembles a “fox”.

・Tanuki:
It is topped with an “Agetama”(also called “Tenkasu,” a tempura batter). Though “Tanuki” means “Japanese Raccoon” in Japanese, This dish name “Tanuki” is said from color of the “Japanese Raccoon”. There are various theories about the origin of this dish name. Here’s one famous theory. The ingredient is sometimes called “Tane” in Japanese. “Udon” and “Soba”, which are not topped with such ingredients as “Kitsune (fried tofu)”, “Tsukimi (egg)”, or “Tempura”, are often topped with “Agetama”. So, “Tanuki” means without this “Tane” (“nuki” is Japanese for “without”). It is said to be a simple counterpart to “Kitsune (fried tofu)” and “Agetama” as an ingredient to “Tanuki”. Perhaps, because the roundness of “Agetama” is similar to “Japanese Raccoon”…?

・Tsukimi:
“Tsuki” is the Japanese word “moon” (“mi” means “see”). Eggs are placed on top of it. This is because the egg floating in the dipping sauce looks like the “moon”.

・Chikara:
It is topped with a “Mochi (grilled rice cake)”. In Japan, “Mochi” was originally a good luck charm, and when eaten, it is believed to be a blessing from the gods. “Chikara” has a connotation like “power”.

・Bakashi-Ai:
It is a dish with both “Kitsune (fried tofu)” and “Agetama (“Tanuki” mentioned above)” on it. In Japan, “fox” and “Japanese Raccoon” have been believed to use witchcraft since ancient times. It was said that they could transform into, and tricked and teased people with their sorcery. They have often appeared in stories. The fact that both of them “Kitsune (fried tofu)” and “Agetama (Tanuki)” are served on one dish suggests that they are competing with each other in sorcery. “Bakashi-Ai” means the word “Con Game” or “Trick-or-treat game” in Japanese.
※ In Kyoto, udon (not “soba”) noodles with chopped fried tofu and kuzu-an paste are often called “Tanuki”. On the other hand, people in Osaka call soba (not “udon”) noodles with fried tofu “Tanuki”. Even in Japan the same dish has different name in different regions. 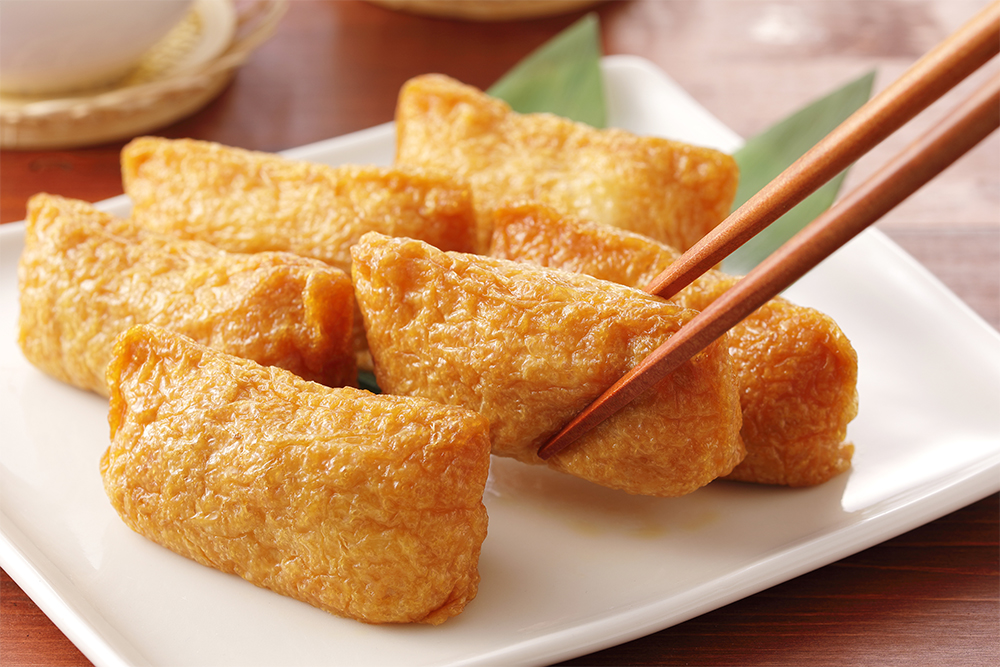 Nowadays, there are a tremendous number of variations of “Sushi” at each restaurant. But most of them are named after the “Neta (ingredients)”, right? The following are just a few that have a brilliant sense of naming.

・O-Inari-San:
It is a sushi made by opening a bag of sweet and spicy boiled deep-fried tofu and filling it with sushi rice. “Oinari-san” is a shrine (Inari Shrine) enshrining the Inari God (Uka-no-Mitama). The fox is the “Shinshi (Divine servant)” of the shrine. It is said to be because of the color of the fox, or because the fox’s favorite food was fried tofu.
※”O” and “San” are Japanese words of endearment. “Shinshi” is, in Shinto, an animal specified as a messenger or servant of god.

・Kappa-maki:
It is a sushi in one of the nori rolls, wrapped with cucumber as an ingredient. The word “maki” means “roll” in Japanese. It is said that cucumber is the favorite food of kappa, a representative Japanese Yokai (or one of the unidentified creatures). Or because the color of cucumber is the same green as “Kappa”.
※ “Yokai” is the “Japanese Specter” sort of thing.

・Tekka-maki:
This is also one of nori roll sushi. It is made by wrapping raw tuna or other red-fleshed fish as an ingredient. From the fact that the ingredient looks like a burnt red iron. That’s a great insight, don’t you think so?

・Namida-maki:
“Namida” is the Japanese word meaning “tears”. It is one of nori roll sushi that wrapped with chopped (or grated) “Wasabi”. It has so strong kicks that it causes “tears” when you eat it.

・Gunkan-maki:
It is one of the making skills for “Sushi” invented for difficult-to-swallow ingredients such as sea urchin, ikura (salmon roe), shirauo or etc. It is a technique used when using ingredients that are unsuitable for making sushi by shaking. Wrap the nori around the rice ball to form a bowl. By doing so, the ingredients can be placed on top. The nori-wrapped rice ball looks like a “battleship”, hence the name.

・Shippo-maki:
The word “Shippo” means “Seven treasures (jewels)” in Japanese. It is a sushi roll with multiple seafoods wrapped as ingredients. The brightly colored, shiny appearance is like a jewel, and beautiful. 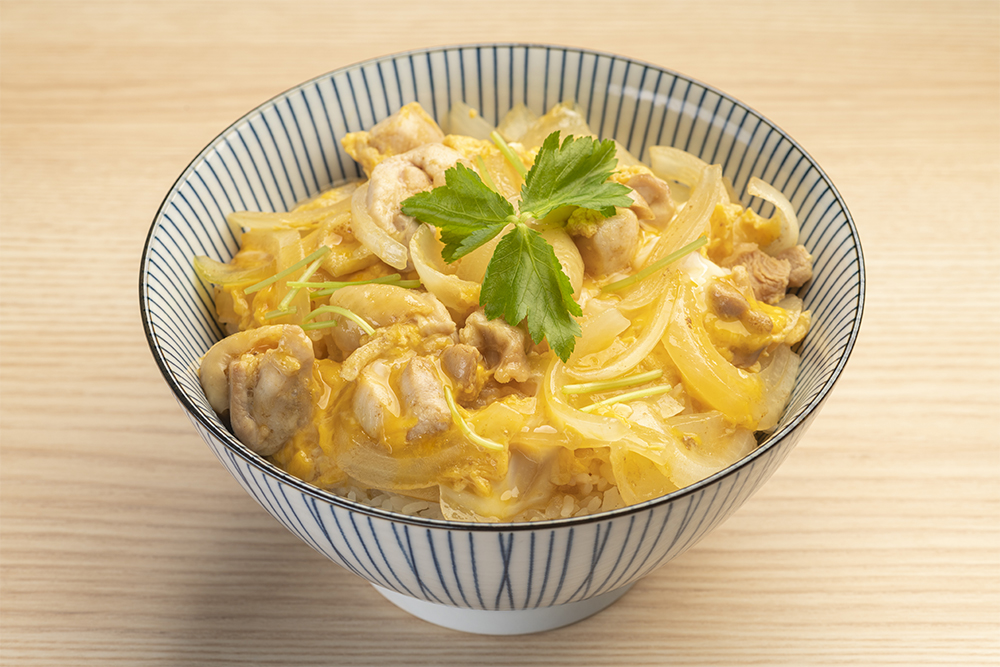 Speaking of Japan, “donburi-mono” is a Japanese dish. Have you heard of it yet?

・Oyako-Don:
The word “Oyako” means “Parent and children” in Japanese. A bowl of rice topped with chicken, eggs and onions cooked in a sweet and spicy broth. Because “chicken” and “egg” are parent and children… It’s a naming idea that only a genius can come up with. “Salmon” and “ikura” are also “Oyako-Don”, but this one is often called “salmon and ikura don” as it is.

・Tanin-Don:
The word “Tanin” indicates “strangers to each other” in Japanese. “Tanin-Don” is a rice bowl dish topped with ingredients other than chicken (mostly pork), eggs and onions in a sweet and spicy broth.

・Tekka-Don:
It is a bowl of rice topped with raw tuna or other red-fleshed fish as an ingredient. The ingredients are often marinated in soy sauce including “dashi” etc. From the fact that the ingredient looks like a burnt red iron.

・Tenshin-Don:
“Tenshin-Don” is a bowl of rice topped with a Chinese-style omelette containing crab meat (or any fried egg with fillings) and a “Amazu sauce (sweet sour vinegar sauce)”. “Tenshin” is one of the cities in China. “Tenshin”, the name of the city chosen and named for the rice bowl dish, the sense of naming is pretty good.
※ “Don” is a common abbreviation for “Donburi”.

How did you feel about? In addition to the ones mentioned above, there are a few other interesting names to call the ingredients. In reference to the famous motif of “Lion and Peony”, or from “Wild Boar and Peony”, one of the patterns of “Hanafuda”, boar meat is sometimes called “Botan (Peony)” (“Lion” is sometimes called “Shishi” in Japan, “Shishi” is another name for “wild boar”). Horsemeat is sometimes called “Sakura (cherry blossom)” (there are some theories) because of the color of its meat. The grated carrot used as a condiment is called “Momiji-Oroshi” due to its appearance, it looks like Momiji (Japanese Maple). Uguisu-Mochi and the like are also nice. Nowadays, we don’t have such this sense of naming, don’t you think so? However, such a good or bad sense of naming inevitably involves differences in religious, faith, or ideological values. This is also a problem for the contents and methods used in movies, novels, and etc. isn’t it? Therefore, we should think it is important to be able to actively understand each other’s background of history or culture without just being amused one way or the other, or conversely, just denying them.

If you are interested, please check them out. If you know of any interesting sense of naming overseas, we would love to hear about them.
※ “Uguisu” is the bird “Japanese Nightingale”, it is known well for its characteristic call, like this “Ho-Hokekyo”.